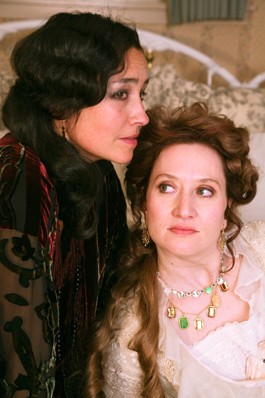 Sixth Street's 'Boston Marriage' a feast for the ears

T here is no actual sex in David Mamet’s effervescent 1999 play Boston Marriage, but thoughts of sex potently underscore nearly everything that happens in Mamet’s least angry, most uncharacteristically playful and sexy work. Superbly performed by a first-rate trio of actresses, and inventively directed by Sheri Lee Miller doing some of her best work here, this Boston Marriage, currently running at Santa Rosa’s Sixth Street Playhouse, takes what might have been mere sex farce (albeit with a lesbian twist) and gives us much more. This is a pioneering comedy, rather, in which sexual orientation is regarded as neither scandalous nor particularly political, but just another colorful character point in a play bursting with color and craftiness.

In Boston Marriage, Mamet launches some of the lightest, funniest, most quirkily entertaining writing he’s ever crafted—and lots of it. Mamet’s characters speak in flowing torrents of densely cadenced, beautifully constructed language, unleashing so many words and witticisms, punch lines and puns, pouring forth such a pounding surge of intimations, insults and ideas, that some members of the audience will find themselves missing more than they catch, but will still enjoy the experience of being drenched in the flood of Mamet’s genius with words.

Best known for harnessing the combative slurs and aggressive verbal interplay of the modern masculine world, Mamet takes an enormous artistic leap with Boston Marriage, a broadly comical, enticingly wicked slice of life about two middle-aged women in Victorian-era Boston. Their discreet long-term relationship—the so-called Boston marriage of the title, a common euphemism of the time—is threatened by a bizarre coincidence involving a necklace, a wealthy man who’s made one of them his mistress and a ripe young woman who’s become the object of the other’s lustful affection.

With her money starting to dwindle, Anna (Danielle Cain), accustomed to her life of upper-idle-class privilege, has taken a rich male lover who bestows jewelry and monthly stipends upon her. “In like a lion, out like a lamb,” is how she somewhat naughtily describes the relationship. Claire (Bronwen Shears), Anna’s longtime love, has returned from abroad (“One must follow the buffalo herd,” she quips) with unexpected news of her own: she has fallen in love with a very young woman, and has made plans for the girl to visit Anna’s home for a “vile assignation,” as the suddenly jealous Anna describes it. The delight in the play is how Anna and Claire—outrageously self-absorbed and casually cruel in the manner of Oscar Wilde and the like—simultaneously shock and delight each other with cultured verbiage that occasionally deflates into coarse street vernacular.

Both Cain and Shears are wonderful. Cain, who has the lioness’ share of the dialogue, perfects a kind of wounded, bitchy irritation that cuts like a stiletto, then crumbles to reveal the soft heart of a committed lover. Shears, straddling a role that requires her to be both smart and foolish in the same moment, performs miracles in the quietest of ways, giving some of her best bits while merely standing there, reacting with affection or shock at Anna’s machinations. And holding her own against the two powerhouses is young Catherine (Tess Coughlin), Anna’s befuddled Scottish maid who might not have the facility for words that her employers have, but quickly learns how to use the few words she does know.

After a thrilling twist in the last seconds of the first act, the play becomes more outlandish, with the two women concocting a plot to impersonate fortunetellers (it’s complicated), but the story is not the main attraction here. In the end, this is a love story, encompassing both Anna and Claire’s enduring love for each other, and Mamet’s love of the English language.