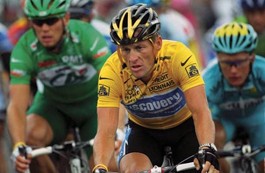 THE FIRST WE heard of Lance Armstrong twittering about Santa Rosa, he was in Hawaii and had just run into some riders from the Santa Rosa Cycling Club. Armstrong snapped a photo and typed “See you in the ToC!” Thus, the trinity of Armstrong, Santa Rosa and Twitter was born.

Armstrong’s past posts reveal many things. He loves the Muhammad Ali documentary When We Were Kings. He downloads the new Bon Iver EP. He surfs with Levi Leipheimer, iChats with his kids, hangs out with Bill Clinton and counts how many times he’s subjected to surprise tests for steroids. When Armstrong hit Santa Rosa, we really started paying attention. Here’s a selection of his twits from town.

Just landed in Santa Rosa, CA for training camp. Time to get back to work!
Just getting up, drinking coffee in the room, reading the beast, and listening to a little Pete Yorn. First day of camp today.
Just back from 3.5 hours with the team. Beautiful here in Santa Rosa.
Crazy tidbit— did my first training camp in Santa Rosa in 1992 with the Motorola Cycling Team. 17 years ago. . . . No wonder my hair is graying.
Sitting in the room, drinking coffee, meeting with Bart (like every day), and listening to Robert “Bob Dylan” Zimmerman.
Done riding. Great 5-hour ride.
And . . . UCI anti-doping control just showed up. #16.
At dinner with Och, Bart, and JD at Syrah in Santa Rosa. Great food and service.
Getting dressed and ready to ride. Listening to Damien Rice.
Driving to the airport in Santa Rosa. Flying down to the wind tunnel.