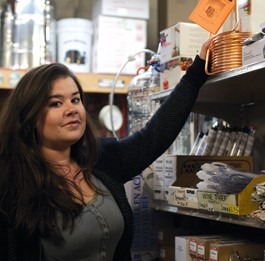 Beer and Y-chromosomes might seem to go hand in hand, but women have a long history as brewers of hops and yeast. “We were squatting by the river doing fermentables in Egypt,” laughs Sonoma County Beerocrats member Cathy Portje. Portje has been homebrewing for two years and is one of the main organizers behind Women’s Brewing Day on Saturday, June 11, at the Beverage People in Santa Rosa. Hosted by the Beerocrats, the event will feature brewing demos by women brewers, raffles, barbecue and beer tastings.

“We’d like to see more women in the craft-beer movement and the craft-beer industry,” says Portje, emphasizing that while women are the focus of the day, men are more than welcome to participate in the fun. The intent is to advocate and encourage women to embrace the art and science of beer making, says Portje: “We’re celebrating women who brew.” Grains and mash for all!