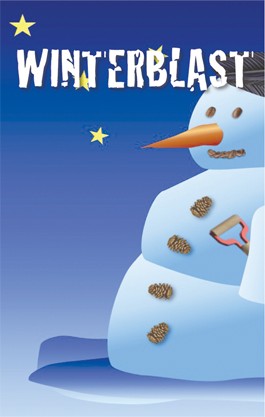 If the Frosty suit has been rented, that means Winterblast is on.

An outdoor holiday street festival that has grown into its own odd shape over the last five years, Winterblast celebrates the artists and craftspeople who work on Santa Rosa’s South A Street adjacent to Juilliard Park. Past years have found pin-up girls posing for photos in storefront windows, fire dancers and stilt walkers in the streets and student performers from the San Francisco School of Circus Arts practicing all manner of public tomfoolery with an amiable crowd’s happy approval. And every year features a stalwart youth willing to spend the evening in a heavy hot fur suit waving to passerby outfitted as Frosty the Snowman.

New innovation being the key to this much free fun, the fifth annual Winterblast naturally introduces the sofa race. Couches on wheels will “race” from the alley fronting the Uribe Studios over to Sebastopol Avenue by the Seed raw food restaurant and then back over to South A Street. “

It’s based on the fact that we want a community event that people can partake in and have a good time and a spinoff a little bit from the Handcar Regatta,” explains artist Jennifer Hirschfield. “You know, make it funky. We’re also doing an official naming of the neighborhood: South of A, even though it’s South A.” The thinking goes like this: In fine urban tradition, South of A becomes SofA; in fine irreverent tradition, no one’s bothering to care that it’s not south of anything other than the rest of A as long as it forms an acronym that can be placed on wheels.

In addition to kinetic seating, the Hubbub Club marching band enacts its seamless magic and found-object sculptor Monty Monty debuts instruments made from cast-offs. Artists Mario and Liz Uribe have engaged a taco truck to set up in their alley adjacent to fire pits that will blaze for marshmallow roasting, and the Imaginist Theater Collective plan a late-night presentation of their Moliere-influenced farce L’École de Maldetête (The School of Headaches, see review, p31), hoping to give more exposure to this struggling but innovative troupe, a recent winner of our Boho Award. And those are just the plans that we know about. You’ll have to show up to discover the rest. All in all, quite a blast.