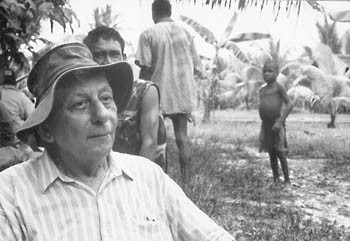 ‘Keep the River on Your Right: A Modern Cannibal Tale’

‘River’ treats Tobias Schneebaum like the Wild Man of Borneo

THE NEW documentary Keep the River on Your Right: A Modern Cannibal Tale is an engrossing visit to three continents, with journeys to the rainy capital of a New Guinean province, the jungles beyond Machu Picchu, and Coney Island.

But the film’s subtitle gives away the movie’s troublesome tone. Tobias Schneebaum, the former rabbinical student turned artist/writer who lived with indigenous peoples of the remotest parts of the world in the 1950s, is exhibited as if he were the Wild Man of Borneo.

Directors David Shapiro and Laurie Gwen Shapiro take the protesting Schneebaum, now 80, back to the places he explored almost 50 years ago. Meanwhile, they’re also teasing out of him the true story of how he ate human flesh in Peru, during his time with a tribe he called the Amarekaire (actually the Harakambut).

During Schneebaum’s visit in the 1950s, these people attacked a rival village and slaughtered the men, ritually devouring the victims. Schneebaum, who witnessed the attack, says he took a bite with his hosts. We see the cannibals as they are today; quite reformed and obviously depressed about it.

It’s also touching when Schneebaum revisits New Guinea to meet an old lover from a tribe he lived with in the Asmat, the New Guinea interior–a tribe that, to Schneebaum’s still tangible surprise, existed without homosexual taboos. The Shapiros don’t underscore the self-loathing quality of gay life in the 1950s. In those days, even the group most sympathetic to homosexuals–psychiatrists–considered gayness a disease. Schneebaum’s dreadful risk at seeking out remote tribes would have been eased by a gay man’s feelings of being doomed anyway.

By the time Schneebaum had published the book of his Peruvian adventure, also titled Keep the River on Your Right, being a sinner had a certain cachet. We see Schneebaum on the chat-show circuit circa 1970 having the cannibal story eked out of him. Footage of talk-show hosts Mike Douglas and Charlie Rose shows us a younger, slightly cocky Schneebaum tolerating a pair of real squares: the hard-charging Rose assures his viewers that he’s taking a no-tolerance stand on cannibalism.

The Shapiros pry one last account of the incident out of Schneebaum, who is obviously sick of talking about it. They bill their documentary as “A Modern Cannibal Tale,” but this meek old man is no Dr. Lecter. Still, I understand why they tried to make the film flamboyant. Schneebaum is a man of few words, and when he’s visiting his old haunts he tends to go completely silent.

Schneebaum seems to have second thoughts about having spread the cannibal tale; the slight bravado he’d shown on the chat shows (“It tastes like pork”) has given way to the piercing regrets that only the aged feel. I couldn’t get over the sense Schneebaum was being exploited. Who’s eating whom here?