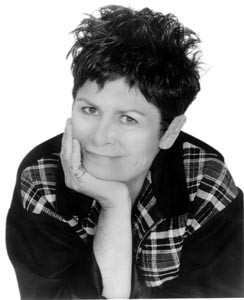 “I COULD NEVER really look like a big, hearty lesbian,” remarks gay stand-up comic Kate Clinton in her slightly amused, soft-spoken voice, talking about her onstage persona by phone from her New York City apartment.

It’s hard to argue with her there. Clinton, who will headline the upcoming Gay and Lesbian Comedy Night at the Luther Burbank Center, possesses a fresh-faced, spiky-haired, Peter Pan-like quality that’s reflective rather than raucous.

Yet she’s never been shy about being a lesbian, a “recovering Catholic,” a former high school English teacher, and the sister of several siblings, two of whom are named (strange, but true) Bill and Monica.

The former instructor learned how to “work a room” during her eight years teaching English to 11th- and 12th-graders in upstate New York. “But they were a tough audience because they came back every day,” she quips.

Still, it wasn’t always so amusing at the time. During her final year as a teacher, Clinton began to come to terms with her own sexuality. She had to grapple with the scary dilemma of exiting the closet while working for a school district.

“This was 20 years ago,” she says. “I have every ounce of admiration for educators who come out [today], but it’s definitely easier now than it was then.”

Clinton, now known as the Unimpeachable Madame President of Queer Comedy, first entered the comedy circuit on a lark. Unbeknown to her, a friend booked her to perform a stand-up routine in a local club. “She said, ‘You’re on in a month’–and that’s how it started,” Clinton explains.

But tickling the funny bone was a knack Clinton had already mastered. At a very young age, she learned all about the sweetly persuasive power of comedy.

“I have three brothers, and I felt if I could make them laugh I could kind of disarm them and we wouldn’t have these terrible towel-snapping fights after dinner,” she says with a chuckle. “So I learned early that making people laugh was a good thing.”

At the beginning of her career as a humorist, Clinton’s material was completely gay-inspired.

“I was fascinated by the gay and lesbian movement,” she remembers. “It was a lesbian separatist movement that I came out into, and there I was this high school English teacher. A lot of people thought I was a spy. I suppose ignorance is bliss. I talked about what I was going through coming out. And no one ever stole my lines!”

Still, her career did hit some major bumps along the way. Operators of the Comedy Store club in Los Angeles routinely told Clinton she couldn’t say certain things or prohibited her from telling gay jokes. It’s ironic, she says, because these days people are disappointed if she doesn’t do gay material.

Back then, she also billed herself as a feminist humorist, but she says some critics balked at the idea that those two things could go together.

“I guess it was really a great gimmick, because I got a lot of radio interviews,” she says. “It was generally guys who wanted to see this little gal who claimed to be a feminist and a humorist.

“One of the largest insults you can level against someone is to say that they have no sense of humor,” she continues. “You do that if you’re really trying to keep somebody in their place and keep them down. But I think we women have been laughing our heads off for a very long time.”

But condescension was far from the only danger back then. More blatant hostility often reared its ugly head.

“It was 1981, before Ellen [DeGeneres] and all that. I had police escorts at some small colleges, and there were bomb threats in the beginning,” she recalls, “although the bomb threats always built a great sense of solidarity and community. People were like, ‘Goddammit, now I’m going to come see this!’ ”

Over the years, though, Clinton says, the mainstream has overflowed its banks, and the gay and lesbian world has been swept right into the flow.

“It’s clear in my act that I’m a lesbian and I talk about that, but really I think the world has opened up, and I talk about the economy, race issues, sports–from a gay perspective, certainly, but I don’t always talk about things gay,” she explains. “I think we’ve become quite blended. Now I’m sort of like the daily paper. You get the opinion, you get the sports news.”

SHE GETS much of her inspiration from current events and from listening to conversations. “I’m the person at dinner who, if anyone says anything funny, immediately asks, ‘Can I have that?’ ” she says. “And I’m always taking notes on things, certainly in the political arena, and some things write themselves. And I think that from my years in teaching I always have kind of a lesson plan for a show.”

Clinton’s tough observations and skewering comments, usually delivered in deadpan faux innocence, often get the biggest laughs. “Is Janet Reno a lesbian?” Clinton is often asked. Her reply? “I don’t know, but her hair is.”

Last year, Clinton completed a successful off-Broadway one-woman show titled Correct Me If I’m Right. In addition, Clinton writes humorous pieces for publications such as the New York Times and The Progressive, where she takes on topics like Viagra and Alan Greenspan worship.

She already has one book under her belt–Don’t Get Me Started, which was published in 1998. She’s currently working on more book proposals and a screenplay, as well as a new CD–which she hopes to record at the end of this summer. Her newest show, titled Y2K8 (pronounced “Y2 Kate”), tours this year.

Clinton is also working on material about families and aging boomers.

Indeed, for the record, Clinton staunchly declines to reveal her real age. “I’m 84 and I’m doing well,” she replies impishly when asked. “Which is surprising, considering how much I’ve flown.”