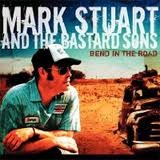 You gotta admit, it took a lot of guts for Mark Stuart to call his band the Bastard Sons of Johnny Cash, even if he reportedly did get approval from the Man in Black himself. But after Cash died, and after too many years of being confused for just another Johnny Cash tribute band, Stuart issued the official name-change announcement: “I feel it is appropriate now that Mr. Cash has passed on to no longer use the name,” he wrote. “It is out of respect for his legacy, his family and his friendship that I felt compelled to make the change.” Nothing else is different on Stuart’s newest, Bend in the Road, which along with twangy originals features an upbeat take on the Billy Joe Shaver classic “I’m Just an Old Chunk of Coal.” Stuart’s well worth driving up to Cloverdale to see, and for free, you can’t beat a Friday night dancing on the town plaza after the farmers market. Kick up some dust on Friday, July 9, at the Town Plaza on Main St., Cloverdale. 7pm. Free. 707.894.4410.