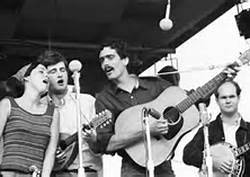 Reunited and it feels so good. That’s most likely the sentiment shared by the members of the Jim Kweskin Jug Band. Still in its formative years, the band entered the music scene at the height of the American folk revival during the ’60s, and reintroduced some much-needed fun amid the political protests and societal discord. Founder Jim Kweskin was eventually joined by others, such as Geoff Muldaur, Bill Keith and Maria Muldaur. This “one big happy family” split in 1968, but many of the original members have returned to provide the same fun folk sounds they delivered years ago in a 50th anniversary tour. The gang’s all here on Wednesday, July 3, and Friday, July 5, at Studio E. 2249 Schaeffer Rd., Sebastopol. $40—$45. 8pm. 707.823.5316.