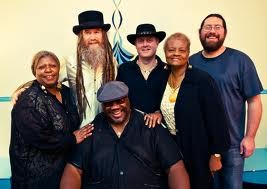 July 13: Melvin Seals and the JGB at Cloverdale Plaza

If you moved to Cloverdale to escape from the tofu-eating liberal hippie horde that is everything south of Cloverale, then the joke’s on you. You’d better lock your doors and hide your kids if you don’t want them smoking the crazy reefer and running off as groupies with Melvin Seals and the JGB. For those of you who aren’t nudist hippie shamans and don’t know, Melvin Seals and members of the JGB played with that total stoner guy Jerry Garcia as the Jerry Garcia Band. The band’s arrival marks a six-percent jump in Cloverdale’s total African American population, and a 100-percent increase in the city’s hella-long-beard-and-dreadlocked-guy community. Watch the local truckers recoil from the patchouli on Friday, July 13, at the Cloverdale Plaza. Broad St. at N. Cloverdale Blvd., Cloverdale. Free. 7pm. 707.894.4410.