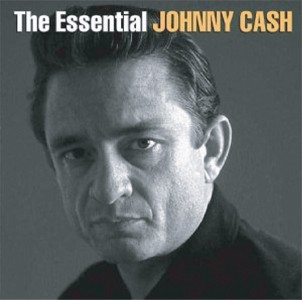 Walk The Line: The dearly departed Johnny Cash is now getting well-deserved tribute after tribute.

In March 1998, shortly after Johnny Cash won the 1998 Grammy award for Best Country Album for Unchained (American), the Man in Black made headlines when his record label took out a controversial ad in the music trade magazine Billboard. The full-page ad depicted a younger Cash flipping his middle finger, accompanied by a short text that sarcastically thanked country radio stations for dumping him from their play lists a decade earlier and derided “the country music establishment in Nashville,” which he felt had unfairly cast him aside at the height of his career.

It was classic Cash, a rare artist who left this world with his integrity intact. As daughter Roseanne Cash pointed out last week at an all-star Nashville tribute to her late father, who died Sept. 12 from complications of diabetes, Johnny Cash was a walking paradox. Over a career that spanned more than five decades, Cash earned a reputation as the tender-hearted crooner who was a master of the murder ballad, a man equally familiar with devils (his own) and angels, and a liberal-minded performer whose antiwar stance flew in the face of his conservative country peers.

The outtakes and previously unreleased material from those now-infamous American Records sessions fuel a new five-CD box set, Unearthed (American/Lost Highway), featuring 79 tracks and a 104-page clothbound booklet with extensive liner notes and a lengthy interview with Cash. The American material introduced Cash–who first crossed over to the pop charts with his 1956 hit “I Walk the Line”–to a whole new generation, thanks to the haunting 1994 MTV hit “Delia’s Gone” and powerful, stripped-down interpretations of such contemporary rock songs as Trent Reznor’s “Hurt” and Depeche Mode’s “Personal Jesus,” both from his Grammy-winning 2002 recording American IV: The Man Comes Around.

Other highlights include some of Cash’s extraordinary unreleased duets, including Bob Marley’s “Redemption Song” with Joe Strummer, Cat Stevens’ “Father and Son” with Fiona Apple, Chuck Berry’s “Brown-Eyed Handsome Man” with Carl Perkins, “Cindy” with Nick Cave, and “Like a Soldier” with Willie Nelson.

Meanwhile, Cash can be heard on two other recent discs. Johnny Cash: Live Recordings from the Louisiana Hayride (Scene Records) captures the country legend in concert at the beginning of his career. Recorded between 1956 and 1963 from Shreveport, La.’s KWKH on Saturday nights, Cash can be heard amid the screaming girls with his longtime backup band the Tennessee Two (guitarist Luther Perkins and bassist Marshall Grant), who helped define Cash’s trademark sound. The sound quality is spotty at times, but the performances are astounding throughout.

While the Lousiana Hayride era found Cash exploring the carnal side of life, his contribution to the new Livin’, Lovin’, Losin’: Songs of the Louvin Brothers (Universal South), a soothing duet with Pam Tillis on the bluegrass spiritual “Keep Your Eyes on Jesus,” finds him getting right with God as he recites a parable from the Gospels and warns against succumbing to the pleasures of this world.

Vince Gill probably said it best: “If God has a voice, I’m sure he sounds just like Johnny Cash.”