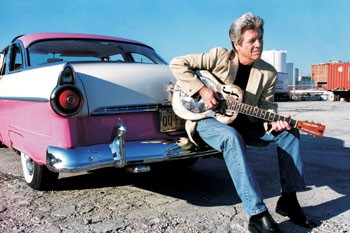 Cruisin’: John Hammond is on a blue streak.

John Hammond is ‘Ready for Love’

It seemed like an odd fit at first. A dozen of the 13 tracks on Grammy-winning bluesman John Hammond’s 2001 album Wicked Grin were penned by the eccentric Beat songster Tom Waits, some of Waits’ band members played on the sessions, and the elusive Waits even popped up with guitar work, errant hand claps, and his trademark growl.

Oh yeah, and Waits, a Two Rock-area resident, supervised the sessions at one of his favorite haunts, Prairie Sun Studio in Cotati.

That made the dark-hued Wicked Grin a Tom Waits tribute, produced by Tom Waits, and featuring Tom Waits. That was a lot of Tom Waits from a guy who’s notoriously, uh, reclusive.

Waits fans loved it. And Hammond found himself attracting a lot of newfound attention. The record–dripping in soul-wrenching Delta-style blues, gospel, and country influences–drew rave reviews from unexpected quarters (though maybe it makes perfect sense that the Wall Street Journal‘s writers are recent converts to the blues) and earned Hammond a coveted W. C. Handy Blues Award for Acoustic Album of the Year.

Now Hammond–who performs May 22 at the Mystic Theatre–is back with Ready for Love, the potent follow-up to Wicked Grin and an album that underscores just how much the association with Waits helped revitalize Hammond’s singing and playing.

“I don’t feel like I have to prove anything, but I’ve got this new sense of freedom,” he has said of the new album. “The experience with Tom Waits opened me up tremendously.”

Ready for Love, Hammond’s 29th album in a career that stretches back 40 years, features 13 ruminations on romance in all its glorious and less-than-glorious shades–12 covers (including two Waits songs) and Hammond’s first-ever recorded original (“Slick Crown Vic,” an ode to cruisin’ for chicks in his 1955 Crown Victoria). The album, produced by David Hidalgo of Los Lobos, receives a swampy roots-music treatment that takes the listener on a moonlit ride through the South and Southwest.

The combo’s chemistry and chops allowed Hammond to stretch out his already considerable interpretive skills, putting his stamp on songs by Hidalgo (“I Brought the Rain”), Waits (“Gin Soaked Boy” and “Low Side of the Road”), Willie Dixon ( “Same Thing”), George Jones (“Color of the Blues” and “Just One More”), and Mick Jagger and Keith Richards (“Spider and the Fly”). Hammond also delves into the mid-tempo torch song “Comes Love,” made popular by Billie Holiday, and “Money Honey,” a longtime Elvis Presley favorite (first recorded by the Larks).

For those who only recently learned of Hammond through Wicked Grin, the new album demonstrates just how deep Hammond’s roots lie. As Waits himself told Rolling Stone: “John knows such a rich pageantry of American music. My songs . . . [are] just a smidgen of what he knows.”

When You Were Near (Solid as a Rock) started out as a nod to a beloved colleague, but ended up as a showcase for the great talent that performs in North Bay clubs. The 16-track CD, produced by Sonoma County bassist Evan Palmerston (formerly of the Elvin Bishop Band), is a tribute to the late Ralph Bryan, a local guitarist who died last year of brain cancer at 54.

Bryan left behind a 13-year-old daughter, Elena, and lots of friends who had thrown a benefit concert to help offset the family’s medical bills. Palmerston, who lost his mother to cancer in 1974, enlisted some of those same musicians to contribute tracks to this fundraising CD. The proceeds go toward a trust for Elena’s education.

The disc, which kicks off with Palmerston’s heart-rending bass solo of Curtis Mayfield gospel song “People Get Ready,” runs the gamut from “Way Too Fast” (featuring longtime Van Morrison sideman John Allair of Petaluma) and “Pool Fool” (with slide guitarist extraordinaire Ron Thompson and pianist Mark Naftalin of the Paul Butterfield Blues Band) to “I Don’t Know Why” (a finely crafted slice of Beatlesque pop by Danny Sorentino) and “Gimme a Break” (a groove-laden soul-jazz number by Michael Barclay).

Bryan himself can be heard on several tracks, including the roots rocker “Baby You’re Gone Now.” Elena Bryan penned the remembrance that closes the disc. Sadly, guitarist Bill Ganaye of the Cool Tones (the first person to step forward with a tribute track), died of a heart attack at age 50 shortly before the album’s release. When You Were Near is available at local record stores.