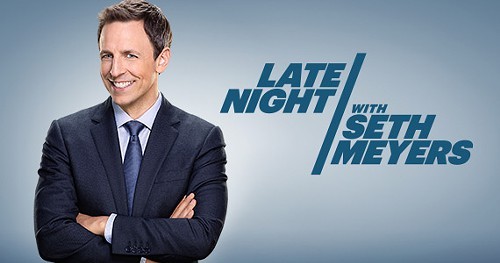 Watching NBC’s Late Night with Jimmy Fallon over the past year or so, I grew to appreciate his sketches like “Thank You Notes,” “Superlatives” and the all-too-rare “Let Us Play With Your Look.” I was excited for the former Saturday Night Live star’s transition to the Tonight Show on NBC, which started last week with a who’s-who of famous guests, not just because it meant Jay Leno was finally off television but because he deserved it after five years on Late Night. Fallon’s a good talk show host and I love me some Justin Timberlake, who had been a frequent guest previously and has already appeared on the Tonight Show. Fallon’s first week was a little awkward, with a lot of blubbering and guests reassuring him of his obvious and multiple talents, but he’s gotten over that and looks to be beginning a long tenure as America’s favorite background noise for nighttime activities (whatever those may be). But Seth Meyers, another SNL alum, who took over Late Night this week, is a different story.

Let’s start with the positive. He has a great bandleader in Fred Armisen. The former Saturday Night Live writer and star is a great fit due to his previous history as a touring rock musician and general musical know-how. Seth Jabour and Syd Butler from Les Saavy Fav on guitar and bass, respectively, Eli Janney from Girls Against Boys on keyboards and Beyoncé’s drummer, Kimberly Thompson make up the 8G Band with Armisen, who is as musically versatile as they come. But those bright spots are not enough to carry the show.

First of all, the set is, well, it looks a little cheap. The Crate and Barrel desk in the middle of the floor with Myers’ dull, gray computer chair behind it brings to mind more of a Wayne’s World public access late night show than the one and only Late Night Show on a major TV network. The backdrop is a boring blue square pattern, like a faux Japanese screen in my great aunt’s guest room. His guests sit on individual chairs, again probably from Crate and Barrel; what happens if he has more than two guests? Or if he interviews a band? Do they sit on the floor? Come on, even I can afford a couch.

Secondly, he needs a new monologue writer (so does Fallon, but at least he admitted it, albeit in joke form, on his Monday night broadcast). His jokes fell flat, possibly due to the lack of banter that usually accompanies jokes in this format. He didn’t connect with the audience, and having the Vice President of the United States on your first program, while pretty impressive, definitely sends a “second string” message. Especially considering President Barack Obama and first Lady Michelle Obama each appeared on Fallon’s version of Late Night.

And finally, the end of the show featured a musical guest that had no business being on television. There are now two iron-clad variety show rules: Thou Shalt Not Allow Lana Del Rey as Thy Musical Guest; and Thou Shalt Not Allow A Great Big World as Thy Musical Guest. His repetitious piano chords and whiney voice made the string section sound not like it was supporting his song with heartfelt emotion, but begging for him to stop plucking out their ingrown moustache hairs. The whole thing was screechy and went on far too long, like a poorly maintained Tilt-a-Whirl at a tiny, off-the-road Mexican carnival. And it made me just as sick.