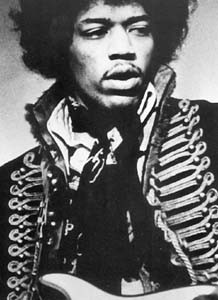 American original: Guitar wiz Jimi Hendrix–still at the top of the heap.

BRITISH POP star Eric Burdon once told Jimi Hendrix biographer David Henderson, in the 1978 book ‘Scuse Me While I Kiss the Sky, “Everyone likes Jimi because they think his cock is bigger than theirs.” That observation may have held up then, or it may have been sour grapes, but 28 years after his accidental death from barbiturates, a lot of folks are still grooving to Hendrix because the pyrotechnic rock guitarist left behind an impressive body of recorded work that is as challenging today as it was during his lifetime.

Want proof? Check out Searching for Jimi Hendrix, the EMI/Right Stuff video documentary by D. A. Pennebaker (Bob Dylan: Don’t Look Back, Monterey Pop, The War Room) and soundtrack album featuring some of the cream of today’s pop, blues, gospel, country, rap, and jazz worlds–many of whom seem stymied by Hendrix’s material, though a few manage inspired interpretations.

For his part, Pennebaker chronicles the sessions in cinema verité style, shadowing artists so we get to see in alternating fashion all their fumbling first efforts progressing into the finished product. Which is to say that there’s not a lot of filmmaking here–mostly edited recording sessions interspersed with artist interviews that shed little insight on Hendrix’s influences.

You won’t see Hendrix’s legendary appendage (immortalized by the equally legendary Plaster Caster groupies). In fact, if you don’t know anything about Hendrix, you won’t learn much about the greatest rock guitarist of the ’60s from this video, which never reveals his image, discusses his history, or shows his performances.

However, you will get to hear Sheena Staples of the Specials comment lamely that she never listened to Hendrix because he was “too weird.” And while electronic experimentalist Laurie Anderson confesses that she “missed Hendrix the first time around” (just what the hell were you listening to at art school, Laurie?), she does manage a nicely deconstructed version of the ambitious sound painting “1983 (A Merman I Would Be).”

The rest is a mixed bag. Los Lobos look very serious as they churn out a workmanlike psychedelic bar-band version of “Are You Experienced.” Los Illegals–who actually do have insightful things to say on the video–rise to the challenge and transform “Little Wing” into an L.A. flower-pop-meets-flamenco-metal tour de force reminiscent of Arthur Lee’s “Love.”

Film composer and trumpeter Mark Isham delivers a powerful, percussion-driven Miles Davis­inspired rendering of “Stone Free” that hints at the often fantasized Hendrix/ Davis collaboration that never happened; Miles brought his trumpet to Hendrix’s funeral but didn’t play, though his fusion years were influenced by Hendrix.

Rapper Chuck D samples “Freedom” as the backdrop for his own “Free at the Edge of an Answer,” an angry meditation on free speech. Roseanne Cash kicks some serious country rock butt on “Manic Depression.” Barroom belter Taylor Dane gets breezy with “The Wind Cries Mary.”

And the Five Blind Boys of Alabama put their patented gospel sound on “Drifting,” transforming the tune into an old-timey spiritual that may be the best Hendrix cover ever.

A mixed bag. All of which proves that Jimi’s real prowess was as an inspired and inspirational impressionist–peerless then, peerless now.