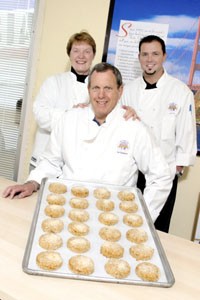 It’s just not natural. Wait. Strike that. It is natural–100 percent natural, in fact, with no preservatives whatsoever. But those disk- shaped num-nums produced by Jeremiah’s Fine Foods in Sausalito are still simply not what you expect when you hear the word “crab cake.” Jeremiah’s founder Ted Sempliner, it turns out, is a houseboat-living, backpacking, Three Dog Night-loving, gourmet food-obsessed entrepreneurial pioneer, and he just wouldn’t be happy turning out any product you could probably find somewhere else.

“We’re unique,” boasts Sempliner, accurately enough. “There’s nothing quite like us.”

They’re also quite the rising star these days. After 10 years in the biz, Jeremiah’s foods are now sold in nearly every major upscale retail outlet from Santa Cruz to Santa Rosa and in the seafood counters of upper-scale supermarkets throughout Northern California, Seattle, and Portland. Last December alone, the cake makers produced and sold 135,000 individual cakes.

Back in 1993, when Sempliner first squeezed his way onto the local portable food scene, his little business was named the Seafood Sausage Company, mainly because sausages made of shellfish were the first things he marketed. Not bad for a company that started out selling fish-flavored sausage from the back of a truck.

“It all began when we took 30 pounds of crab, scallop, and shrimp sausage to the farmers market in San Rafael,” Sempliner explains, “where they promptly sold out in about two hours. The next week we were up and running as the Seafood Sausage Company.” About eight months later, the fledgling company won its first wholesale account, providing seafood sausages to Molly Stone’s Market in Sausalito. Shortly thereafter, around the time his wife Linda joined the company as CFO, Ted developed the company’s first handmade seafood cake.

“It was a scallop cake with whole kernel corn, green onions, and some vanilla,” he recalls. It was a success. The retail stores that he’d been selling sausages to snapped up the newfangled scallop cakes and demanded more. So it wasn’t long before Ted and Linda had developed other variations on the seafood cake, which was fast becoming their most popular product.

Needing a name that did not limit them to sausages, the Sempliners cast about for a new moniker. For years they’d lived on a large, green houseboat in Sausalito, a craft nicknamed the Bullfrog due to its conspicuous green color and large round windows. The Sempliners had taken the name a step further, christening their houseboat the Jeremiah, after the old Three Dog Night song “Joy to the World” (“Jeremiah was a bullfrog”–get it?). Shortly thereafter, the company was renamed Jeremiah’s Fine Foods.

Newly named, the company began producing crab cakes, salmon cakes, and the scallop and shrimp cake that won first prize at last year’s California Restaurant Show. But how–how? how? how?–does one make the leap from crab cakes and shrimp cakes to cakes made of risotto and macaroni?

“I was always envious of people who made products out of flour,” Sempliner admits with a hearty chuckle, “because flour is cheap, and here I was making things out of crab meat.”

After hitting upon the idea of using pasta in their cakes, Sempliner and company worked for a year to develop a series of risotto cakes that could be frozen, defrosted, and cooked in a pan without turning mushy. The first of the new cakes officially hit the market about two years ago. It’s been a slow start, but Sempliner says the new items are finally beginning to take off.

“It takes a while with something new for people to figure out what it is,” he says. “And where it is.”

By that last remark, Sempliner refers to the fact that for years Jeremiah’s main customer base had been finding the shrimp and scallop cakes at the seafood counter. It was a successful arrangement.

With the introduction of the new pasta products, however, the trick was to transfer some of that success from those fish-craving counter customers to the breakfast-burrito set patrolling the frozen-food section in search of something new to thaw. The solution was to do a lot of giveaways right in-store. If you’ve visited a Whole Foods or a Molly Stone’s, there’s a good chance you’ve seen one of Jeremiah’s enthusiastic missionaries, cooking up prawn cakes and spreading the good word.

“We know these are different,” Sempliner says. “We also know that once people taste them, it stops mattering that they’re different. Taste is everything.”

So how do they taste?

To find out, we engaged a highly trained team of gourmet-food fans to help us. Actually, we invaded that cool underground lair known as Copperfield’s Used Books in Petaluma, passing out frozen twin-packs of Jeremiah’s products to the hard-working and articulate employees thereof, requesting that they take home the samples, cook them up in whatever way deemed appropriate, and report back on their findings. Daniel, Theresa, and Art generously agreed to assist.

Art, aided by his wife, Holly, started out trying the new paella and shrimp cakes, which they fried in a pan coated in vegetable oil. They took a while to cook, Art reports–about eight to 10 minutes on each side–but the result, served up with a side of steamed asparagus, was apparently pretty spectacular. After her first bite, Holly’s first words were, “God, is it good!” She liked the creamy texture and–her words again–the “sublime flavor.”

“The paella cake is outstanding, a real winner,” says Art. “The consistency is like risotto crossed with a potato pancake, and the medley of flavors was really interesting–shrimp, onions, peas, red bell pepper, and saffron.”

“The saffron was what put it over the top,” adds Holly. “Without hesitation, we would eat these again.”

Not so successful, unfortunately, were the salmon cakes, one of Jeremiah’s lead products. The official report is: good–but not that good.

“I could take it or leave it,” says Holly.

“The flavor was really subtle,” explains Art, “a bit too subtle. Compared to the paella cakes, they were a letdown. They had no oomph. The paella had a lot of oomph.”

“I was impressed with the red pepper and Jack cheese cake,” reports Daniel. “It had a nice, spicy flavor, but it wasn’t too overpowering. It was better risotto and cheese than I’ve had in most restaurants.”

Daniel tried cooking the cakes two different ways, frying the first in a pan with butter while baking the other in the oven. “I liked the fried one the best,” he admits, “because it gave it a crispy texture–crunchy on the outside and gooey on the inside.” Though he says the baked cake ended up melting the ingredients together more fully than the fried cake did, the result was a cake that was, as he puts it, “just gooey all over. It still tasted good, but I guess I’m not that into gooey foods.”

Theresa, who took home a package of mac and cheese cakes and some of the risotto and vegetable variety, was more impressed with the latter than the former.

“The mac-and-cheese weren’t that good,” she says. “Compared to Kraft macaroni and cheese, they were kind of bland. The risotto and vegetable, though, was really nice. It had a good flavor, good texture, and–I read the label–it’s really good for you. I think these would be a quick, healthy thing to feed to kids. One or two of these is practically a meal unto itself.”

With a laugh, she adds, “The only thing missing was the meat.”

Now that people in Northern California are finding Sempliner’s creations, the company is preparing to start the hide-and-seek all over as they take the cakes out across the country. To make that happen, Jeremiah’s has hired a full time CEO, Matt Fuller, who was brought on a year ago. Since then, the company has introduced a flourless coconut prawn cake, specially developed for the Williams-Sonoma Christmas catalog and now available in some local Whole Foods markets. Best of all, the move to the deli counters of other states is officially underway.

“We just got the biggest order they’ve ever had,” says Sempliner, “from the Whole Foods store in Chicago. We can’t wait to see what they think of us in Chicago.”