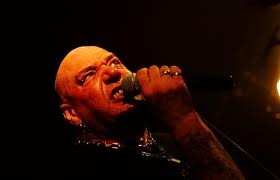 Just about every time Bruce Dickinson quits Iron Maiden, diehard fans salivate at the desire to see original vocalist Paul Di’Anno return to the band. But chances are such a reunion won’t happen, and not just because the growly-voiced atheist was kicked out in 1980, after two records, for essentially being too drunk. Since, Di’Anno has lived in Brazil and become immersed in that country’s underground music scene; opened an internet cafe in Great Britain and recorded the occasional solo project. But it’s his gruff voice that would bar him from singing the frilly high notes of current Iron Maiden material; it’s also his best asset. See him on Saturday, Jan. 1, at the Last Day Saloon. 120 Fifth St., Santa Rosa. 9pm. $18–$20. 707.545.2343.

Sept. 15: Caravanniversary at the Headlands Center for the Arts