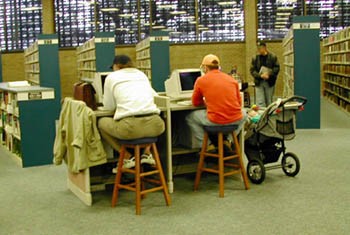 Internet filtering systems, proven ineffective, may be required in libraries

Did you hear about the library that unveiled its brand new website on its computers last month? The library’s own filtering software banned it.

You see, Flesh Public Library in Piqua, Ohio, was named more than 70 years ago after Leo Flesh, the library’s founder. The library’s filtering system, Net Nanny, didn’t like the words “flesh” combined with “public” in its new domain name www.fleshpublic.lib.oh.us, so the library couldn’t get on its own website.

But instead of changing the filtering system, the library changed its domain name to www.piqua.lib.oh.us.

This incident illustrates the basic problem with filtering systems, which often deny access to legitimate sites because they block sex-related terms like “condoms,” “abortion,” and “homosexuality.” A new study by the Henry J. Kaiser Family Foundation said that the filtering software that federal law requires in school and library computers blocks 25 percent of health sites when set on the most restrictive levels. The study also showed that the same filters set on the lowest restriction levels stopped only 1.4 percent of health sites while still blocking most pornography (91 percent of pornography at the most restrictive level and 87 percent at the least).

The Supreme Court just agreed to rule whether the government can restrict Internet surfing in libraries. The case concerns the Children’s Internet Protection Act, which requires library computers receiving certain kinds of federal funding to have a “technology protection measure” such as filters to shield children from online pornography. A federal district court in Pennsylvania declared that the act violated the First Amendment, ruling in favor of the ACLU and American Library Association, which challenged the act. This is the third case the Supreme Court has had concerning free speech and protecting children from Internet pornography.

The issue is very complicated, explains Tom Trice, library director for Sonoma County. “The conversation should be refocused on how information is provided to the public,” he says. “The library provides a variety of services to many people with different needs to consider. Then the whole issue about how information is sorted on the Internet is also complex. It’s a subject that requires a lot of patience and thought.”

Sonoma County public libraries do not provide filtering software on their computers, in part because it creates “a false sense of security” about the types of information that can be accessed, according to the library’s official policy. The library commission states that “no available filter or blocking software is effective in blocking what some might find objectionable, and all filters block access to much information which many would find useful or important.”

The library commission formed its Internet policy several years ago to much controversy. One antipornography group, Help Oppose Pornography’s Exploitation, was particularly vocal in efforts to convince the library commission to provide filtering software. The group has been dormant for the last few years but is now regrouping and starting new efforts in “educating the public against the harmful effects of pornography,” according to co-director Alice Bailey.

“I would like to see the library at least put filters in the children’s section, if not the entire library,” she says. “The library should be as safe as possible. Putting pornography in a public realm like that mixes stimulated men with women and children and can create a hostile or even dangerous situation.”

Do people actually view pornography in Sonoma County libraries, or has the whole thing been exaggerated? It’s hard to tell, but there have been anecdotal reports of people walking by and seeing pornography left on the screen after someone else has been viewing it. Bailey has several copies of letters parents wrote to the library complaining about their children seeing pornography on the computers or accidentally accessing it.

If the Supreme Court fails to overturn the Children’s Internet Protection Act, county libraries will remain unaffected because they do not take the federal funding the act targets. However, the act may affect school libraries and libraries in other counties, not to mention the 14 million people a year who use library computer systems in the United States.

“If the act is not overturned, libraries who don’t put filtering systems on the computers may become ineligible for certain federal funding opportunities,” says Trice. “They will have to look at what the impact will be on them financially.”