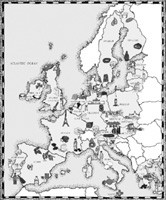 In with the Old

'Authentic' European foods come back from a 2,000-year slumber

Forget eating locally, because Europe is all the rage–or at least the European Authentic Taste is. Begun in 2004 under the direction of the European Union as an effort to educate the American trade in identifying and appreciating authentic, high-quality and traditional European foods and beers, the program known informally as EAT is sweeping the specialty-food stalls.

The full story goes back to 1992, when the EU began its current system of protecting and promoting traditional and regional products. Three “designations of quality” were created, and thus the whole fuss about Champagne was born. Then, officials designed a lengthy and sometimes costly application process for farmers, brewers and producers who felt that their goods merited the government’s stamp of approval. The literal stamps are blue-and-yellow sun-shaped figures, each of which differs slightly in appearance to allow consumers to recognize the particular designation of quality. Today, approximately 700 items in over 20 nations reside proudly on the list of recognized products, while 300 more wait in line for approval–or rejection.

According to Ann Connors, project manager for the EAT campaign, about a hundred EU-recognized products are readily available on American shelves and casually served on American tables. These include Kalamata olives, Parmigiano Reggiano cheese, Newcastle Brown Ale and Prosciutto di Parma. Several hundred others can be found in specialty stores, while the rest can easily be tracked down in the Old World if high-quality local products really aren’t good enough for you.

“The European Union does not claim to have cornered the market on good foods,” Connors says. “We recognize that good food comes from all over, but in Europe they’ve had 2,000 years or more to find out what grows best, and to cultivate that. Many Europeans are so accustomed to having regional products and an agricultural food heritage where the food is a huge part of a place’s identity.”

But the American palate is maturing, and with better wine and beer we are also demanding better cheese, ham, bread, oils and spices. While decent products and perhaps even very passable imitations are made locally, many consumers now want the real thing. This is quite a change for a nation that’s grown up on powdery “parmesan cheese” shaken from a green can and rubbery orange “cheddar cheese” oozing oil when grilled on white bread.

(Interestingly, there is also a particular Czech beer whose name has suffered its fair share of abuse by American imitators since the brew was first released in 1802. This old brew pours out in a rich and golden hue, boasting a generous head of foam, a unique aromatic skunkiness and hints of apple, citrus and spice. Its name: Budweiser Burgerbrau.)

The EAT campaign recently visited the Bay Area and brought together several writers and media figures for a discussion, cookout and tasting at the California Culinary Academy. We were welcomed to a kitchen on the third floor, where we grazed over a spread of fine European cheeses and cured meats before Academy chef Damon Barham set us to work preparing the multicourse extravaganza that we would later enjoy in the dining room. We divided into pairs, and a boisterous hour followed. Radio personality Stephen Valentino, dressed impeccably as an unmistakable representative of the good life, sang opera while preparing risotto with Spanish saffron and Manchego cheese. Across the prep table, journalist Edward Schwartz and Epicurean Traveler publisher Scott Clemens quietly prepared an arugula salad and mini croque madame sandwiches. Connors of EAT took the very noble job of deep-frying strips of Danish cheese in beer batter herself.

EAT rep JoLynn Howe and I prepared a halibut-squash dish enhanced with Kalamata olives and organic olive oil from Cyprus. The halibut did not quite appear to be halibut, so I asked an Academy chef about this. He said we were actually preparing “blue-nosed sea bass” fillets. A blue-nosed sea bass is one of those fish that has no Latin taxonomic identity and exists only in the marvelous vocabulary of chefs and food writers. I asked several fellow guests if they knew what the living, swimming version of this entrée was called and where in the world’s oceans it came from, but no one knew or seemed worried. It’s peculiar that these culinary wizards and poets who concern themselves with the precise county, valley or hillside from which some esoteric oil or honey originates were not interested in knowing what fish they were about to eat.

We ate our meal in the first-floor private dining room. A well-trained waitstaff welcomed us to two round tables, where I sat with Ann Connors, blogger Amy Sherman, photographer Jason Tinnaci and Edward Schwartz. Our waiters came tiptoeing around the room to take drink orders, and I swam through the 2003 Vouvray, the 2003 Bourdeaux, the 2004 Côtes du Rhône, a Pinkus Organic Pilsner and a splash of Reissdorf Kölsch, a traditional German beer that dates back to the 1200s.

As the food came out one little plate at a time, prominent retailer (Zingerman’s) and food essayist Ari Weinzweig stood and delivered his thoughts on traditional European food products: “One of my strongest beliefs is that if you start with good ingredients like these it’s not that hard to make really flavorful food. What I think is very difficult is starting with mediocre ingredients and making something that tastes great.”

Not unlike that fancy press spread, the EAT campaign operates on a foundation of benevolence. Its three goals are to protect product names from misuse and imitation; keep rare and special products which have limited practical use, like Austrian pumpkinseed oil from vanishing; and to guide United States consumers in identifying authentic European ingredients. It is then up to the consumer to make a conscious choice: Buy the real thing from Europe, or buy a passable imitation from a local farmer.

Me? Oh, I’m convinced. It’s European all the way. I mean, just imagine the shame if your dinner guests found out that you had shopped local.

What are EAT’s designations of quality anyway?

Protected Designation of Origin (PDO) For producers, this is the toughest label to achieve. It guarantees that the product has been produced, processed and prepared in a specifically defined geographic region by traditional means and methods. The raw, unprocessed materials must also come from the region whose name the product bears and the quality and character of the product must reflect the terroir, the particular soil and climate conditions of that region in order to gain the stamp. West Country Farmhouse Cheddar cheese from the United Kingdom and Riviera Ligure olive oil from Italy are just two PDO products.

Protected Geographical Indication (PGI) This is a more easily attained designation, for just one stage in the production of a product must be tightly linked to a geographical place. For example, the grain used in a certain type of bread may be grown in one region, with the rest of the prepping and baking process occurring hundreds of miles and several languages away. Most of the baked goods on the list, such as Pyramid cake from Sweden, bear the PGI stamp. Normandy cider is another PGI item.

Traditional Specialty Guaranteed (TSG) This is the most flexible of all the designations. It guarantees that producers used traditional production methods in making their product, with geography, region and terroir playing no key role. Serrano ham–massaged with sea salt, matured, dried and aged for as long as 500 days–is a TSG product.