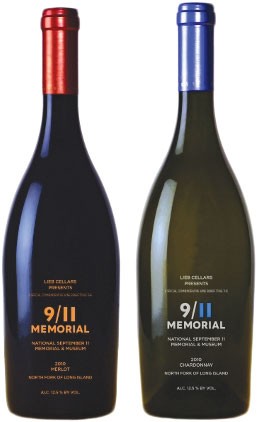 At first glance, a 9-11 wine sounds like a skit worthy of SNL. It sells for $19.11 a bottle. Described as a “guilt-free indulgence” that’s “accented by hints of vanilla and smoke.” Made with grapes grown just 90 miles from the World Trade Center. Ha! Good one.

But, folks, it’s true indeed: in honor of the 10th anniversary of the tragedy, Long Island winery Lieb Family Cellars has released a 9-11 Memorial Merlot and Chardonnay. According to their site, “the concept emerged at harvest just days after the Sept. 11 disaster.” Part of their Great Wines for Good Causes campaign, 6 percent to 10 percent (why not 9 percent to 11 percent?) of all proceeds from the wines will benefit the National September 11 Memorial & Museum.

For some, naturally, a 9-11 wine is less than palatable. Anthony Bourdain tweeted his reaction: “What kind of piece of shit would create such a product?” And New York City councilman Peter Vallone asked, “What’s next: a 9-11 pastrami sandwich?” To be fair, the winery stands in the company of scores of enterprising vendors who started cashing in on the tragedy before the towers had even stopped smoldering. A 9-11 belt buckle, anyone? How about a limited-edition ceramic plate? But if the publics’ reaction is any indication, the only question left is: What pairs best with tacky?