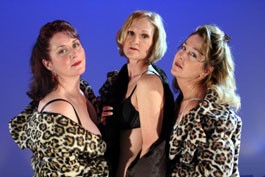 AT hits mark with hilariously dark 'Smell of the Kill'

‘I like the dark.” So says Nicky, a hard-as-nails New York book editor with a bullying embezzler for a husband, to dinner guests Debra, a desperately insecure ex-real estate agent, and Molly, a slightly dim, stay-at-home trophy wife. Nicky utters the line just before heading down to the basement to see why all three of their husbands haven’t come up from checking out the new downstairs meat locker after a not-so-partylike dinner party.

It’s a good thing that Nicky is on good terms with darkness, because in playwright Michele Lowe’s viciously brilliant 1999 comedy The Smell of the Kill–produced by Actors Theatre at the Sixth Street Playhouse–things are about to get a whole lot darker.

Dark comedies are tricky. Think of David Mamet’s American Buffalo or Tracy Letts’ Killer Joe, masterpieces of dark comedy that are hilarious at the start and then, after taking a sharp turn or two, set down stakes in the land of the dense, dark and dramatic.

The miracle of Michele Lowe’s nasty little play is that the playwright manages to keep the great big laughs coming like clockwork, no matter how desperate the situation or how grisly the unfolding events. There are no monologues here, just the smart pitter-pat of first-rate dialogue served up in juicy and dazzling bits of stunningly sharp chit-chat. It’s a juggling game, and in director David Lear’s hands, it’s incredibly entertaining.

Unfolding in real time (we see a working clock on the kitchen wall), Nicky, Debra and Molly demonstrate in the first few minutes that they are more associates than friends, linked only by marriage to men who once went to college together. There is a bracing lack of subtlety in the setup. Each woman is married to a cad, either a crook (Jay), a philanderer (Danny) or a creepy overpossessive, asexual stalker (Marty). (The men are played off stage by Al Liner, Joe Winkler and David Yen, respectively, who are heard but never seen.) On the night of this particular dinner party, all three women have arrived at distinctly different turning points in their lives, all pushed to the edge, each one maybe a little bit temporarily nuts.

Nicky (a snappishly icy-hot Kimberly Kalember) is at the end of her rope. Jay is pushing her to quit her dream job so he can use her profit-sharing to pay for lawyers’ fees in his fight against an embezzlement indictment. She’s taken to compulsively buying frozen peas and uses a butcher knife to tack up newspaper articles about Jay’s court case to the kitchen door. Molly, in a nicely layered performance by Sheila Groves-Tracey–revealing the secret smarts buried beneath the surface ditz–has been carrying unspoken grief that leads her to fixate on other people’s babies, and her sexless marriage has forced her into a series of meaningless affairs.

Debra may be the most complex of them all. Perfectly played by Mary Gannon Graham, Debra is a wreck of lost self-esteem, desperately making excuses for her husband’s faults, even when those faults threaten to steal everything she lives for. It is Debra’s transformation that we see most vividly, and when it comes, in a sweet, sudden rush of breathless inevitability, it’s as moving as it is hilarious.

With Smell of the Kill, Actors Theatre closes out an extremely strong season, ending on a high note with one of the best ensembles of the year–on the Sixth Street Stage or any other in the North Bay–acting their hearts out in what will surely prove to be one of the best, darkest, funniest productions of the year.