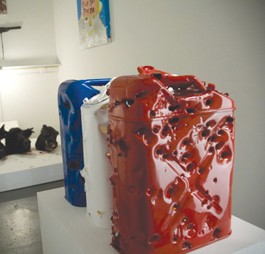 “I’m deep in the middle of the Sonoma wilderness,” says Charles Linder, taking a break from boar hunting to talk on his cell phone. “I’m surprised I’m getting reception.”

Boar blood might not be exactly what comes to mind when one thinks of Napa Valley. Regardless, KQED and the di Rosa Preserve both continue their fostering of modern artists on July 27 with Linder, the first speaker in their series of summer lectures with Spark artists.

KQED’s Spark follows various personalities in the Northern California arts scene. And for “personality,” Linder certainly fits the bill. Past performances of his include two full pig roasts done in the Tenderloin of San Francisco (“The locals came out, which was bizarre,” states Linder bluntly) and a performance-art piece with Linder sawing through boar heads after drinking all day.

Linder’s first gallery, Refusalon, began in an adopted garage south of Market in San Francisco. In 2006, Linder was featured by Spark for his creation of Lincart gallery, which supported various artists including Yayoi Kusama and Tucker Nichols. Since then, he has foregone gallery ownership to focus more heavily on his individual art career.

“Owning the gallery was such a dysfunctional idiosyncrasy of my personality,” chuckles Linder. “It was an obsession I couldn’t stop. I always used to deny this, but it’s very hard to do two things at once well. I had to admit to myself that I was not being that creative of an art dealer or artist.”

The di Rosa has paid particular interest to Linder throughout his career and currently owns eight of his works, one of which is Fiat Lux, a collection of animal crossings signs demolished by grime and bullet marks.

Linder’s art has continued on a similar theme. One of his current collections, Twenty Five Easy Pieces, involves the artistic altering and mounting of taxidermy animals, found skulls and the oil canvas rendering of an adorable woodland creature holding a sign that says “Fuck you – Pay me.”

Growing up in Alabama, Linder hunted as a child but stopped after his move to the more animal-rights-oriented state of California. He has recently gotten back into the chase again, and, he jokes, he’s made it a large part of his art.

“I love spending time in the woods stalking, and the whole food-preparation aspect. Boars are introduced, nonnative species wreaking havoc on the fauna and watershed. But they taste good,” Linder says on the growing connection between his art and lifestyle.

That very connection, according to Linder, is what makes the San Francisco art scene special. “I gotta admit it’s kind of cursed,” says Linder. “Everyone lives here, I think, for the lifestyle. I couldn’t say I stayed here for money or career. My lifestyle has become a career. I don’t think I could do that in L.A. or New York as easily.”

Indeed, Linder continues to harness his lifestyle into an art with his newest exhibition at San Francisco’s Guerrero Gallery, displaying photos, painting and physical representations of pools. According to Linder, it’s the deep aqua colors and the association between poolside and traveling hotels that inspired the collection. As is only protocol, a goat roast kicked off the opening reception.

In Napa, a wine and cheese reception follows Linder’s lecture.