Summertime: a handful of flowers, a bottle of cheap wine, and these events 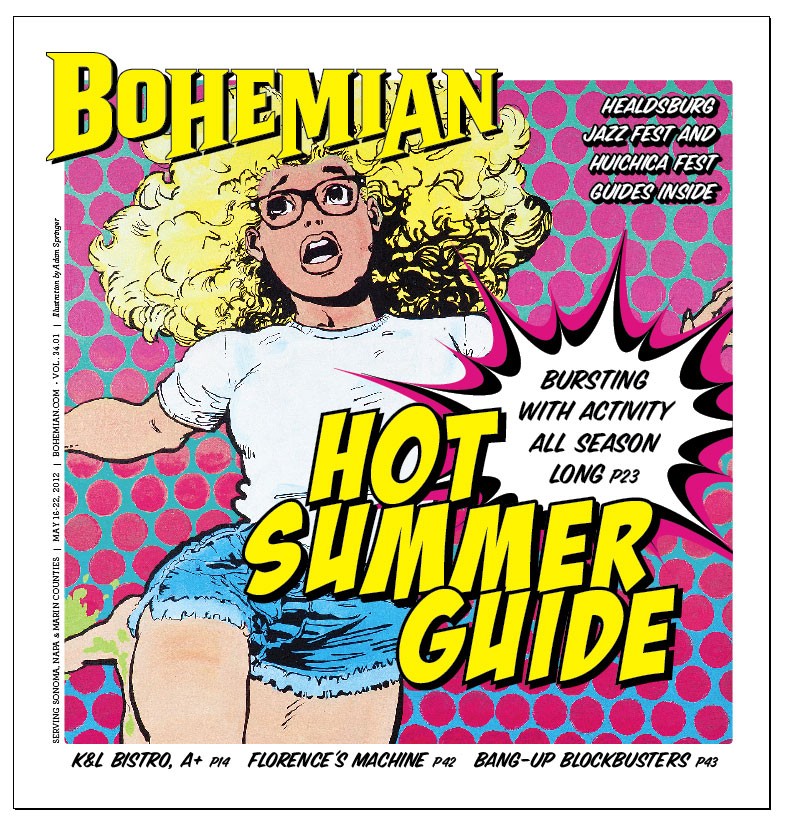 Summertime memories are best made casually—the late-night walks, the impromptu skinny-dipping sessions, the boozy kisses and the houses full of friends. But planning your summer is key also, if only to make sure you don’t miss the best that the North Bay has to offer. Here’s our selective list of ways to spend the hottest season of the year, from Memorial Day to Labor Day.

Larkspur Flower & Food Fest Bloom with pride as local gardeners bring their best flora to show off at this 23rd annual celebration. The daylong event features a schedule of flower-themed events and gourmet food exhibitions. May 27 on Magnolia Avenue, downtown Larkspur. 11am–6pm. Free. 415.383.3470.

Auction Napa Valley Having raised more than $97 million for local nonprofits since its inception in 1981, Auction Napa Valley is a crazy big way for wine lovers and deep pockets to enjoy a party. The event, May 31–June 3, features all the many different kinds of auctions, winery events, dinners, dress-up opportunities and fun that regular attendees count on. The main auction is scheduled for June 2 at Meadowood. 707.259.0123. www.napavintners.com.

KRSH Backyard Concerts KRSH Backyard Concerts usually feature a healthy mix of dancing, good music and guys in fedoras. This year’s lineup promises not to disappoint, with a lineup including the Revelations (May 31), the Brothers Comatose (June 7), Blind Pilot (July 5) and an Americana Showcase featuring Michael O’Neill, Ian Moore and others (July 19). 3565 Standish Ave., Santa Rosa, 707.588.0707.

Healdsburg Jazz Festival Triumphantly returning for its 14th year, this not-to-be-missed, 10-day music festival delivers a straight-ahead jazz lineup of vibrant talent including Roy Haynes and his “Roy-Al Family,” along with Kenny Burrell, Vijay Iyer, Sheila Jordan, the Calvin Keys Organ Quartet, the Michele Rosewoman Trio and many others. Various locations in and around Healdsburg. June 1–10. Prices vary per event. 707.433.4633. www.healdsburgjazzfestival.org.

Beerfest: The Good One! Eat, drink and be merry to support an excellent cause when the 21st annual Beerfest to benefit the Face to Face—Sonoma County Aids Network floods the outdoor areas of the Wells Fargo Center. Tickets include all food and beer tastings and a souvenir glass. With more than 40 microbreweries, this event is a who’s who of Northern California artisans. June 2, 1–5pm. 50 Mark West Springs Road, Santa Rosa. Twenty-one and over (alcohol till 4:30pm). $45. 707.546.3600. www.f2f.org.

Sonoma Historic Motorsports Festival Some 400 vintage vehicles prepare to race at the second annual Sonoma Historic, including legendary marquees like Ferrari, Porsche, Lotus, McLaren and Corvette. The race will take place at Infineon followed by a festival at the Wine Country Pavilion replete with wine and food tastings. June 2–3. $20–$60. www.infineonraceway.com.

Marin Home & Garden Expo Exhibitors, lectures and demos showcase all things for house and yard in Marin County at this second annual expo event. Put on by the Marin Builders Association, all proceeds benefit the association’s scholarship fund. June 2–3. Marin Center Fairgrounds and Exhibit Hall, 10 Avenue of the Flags, San Rafael. 10am–6pm. $10. Free for kids under 13. 415.507.1537.

Art at the Source More than 150 artists in 96 studios throughout western Sonoma County are open to the public during two weekends, June 2–3 and 9–10. Celebrating its 18th anniversary, Art at the Source provides an opportunity to look behind the scenes, meet the artists and snap up some great deals. Maps can be found at www.artatthesource.org or at the Sebastopol Center for the Arts, 6780 Depot St., Sebastopol. Free. 707.829.4797.

Sonoma Community Center Annual Ox Roast Chow down with the locals on a premium cut of ox meat roasted on the barbecue pits at Sonoma’s downtown. A tradition for decades, the event includes plates full of food, live music, dancing, art and a “sauce your ox” competition. Voted on by the ox eaters, the chef who cooks up the most prized batch of barbecue sauce wins the 2012 Ox Sauce trophy with his or her name engraved on it. 276 E. Napa St., Sonoma. 11am–5pm. June 3. Free. 707.938.4626.

Planetary Dance International dance icon Anna Halprin leads participants in a communal movement ceremony filled with poetry, songs and percussion. The annual dance, in which movers can run, walk or stand in a series of concentric circles, will be centered on the theme “peace” on June 3, beginning at 11am at Santos Meadow in Mt. Tamalpais State Park. For registration details, see PlanetaryDance.org.

Peggy Sue’s All-American Cruise Four days of classic-car mania sweep up downtown Santa Rosa for the 10th annual cruise-till-you-snooze celebration. The event showcases a wide array of activities and locations, and opens with a cruise-in and performance by the Poyntlyss Sistars (June 7) at A Place to Play Park, 2375 W. Third St., Santa Rosa. Other festivities include lots of live music, cruises across Sonoma County, chili and pasta cook-offs, pancake breakfasts, contests and award shows. June 7–10 at various locations in Sonoma County. $6–$80.

Higher Vision Festival This new event features Burning Spear, Tinariwen, the Motet and many others on June 9 at the Sonoma County Fairgrounds. If the consciousness-altering tunes get your head a-spinning, there will be plenty of organic grub to bring you back down to earth. 415.256.8499 or InTicketing.com.

Techno-Tribal Dance The decade-plus crown jewel of the Harmony Festival goes smaller but doesn’t disappear at the Hopmonk on June 9. Two stages of pulsing electro music feature Love & Light, Russ Liquid, Seraphim and many others. With limited capacity, this is a first-come, first serve event. See www.techno-tribal.com.

Marin Art Festival This “lawn party for the arts” features over 250 artists by the Lagoon in the Marin Civic Center in a two-day outdoor party that includes international food, live music, fine wine and brews, and more. In addition to paintings, jewelry and sculptures, patrons can enjoy a wide variety of Cajun, Greek and French fare. June 16–17, Lagoon Park, at the Marin Center, Avenue of the Flags, San Rafael. $10; kids and parking, free. 415.388.0151. www.marinartfestival.com.

San Anselmo Art & Wine Festival Over 60,000 folks converge on downtown San Anselmo each year—hungry, thirsty, craft-starved folks. As usual, a section of the fest will include over 200 artists and their various works. There will also be food booths, wine, a merchant marketplace, an emphasis on live music and a kids area. June 23–24. San Anselmo Avenue between Bolinas and Tamalpais streets. 10am–6pm. 415.454.2510.

Mill Valley Wine & Gourmet Food Tasting Now in its 30th year, this event was founded by Jim Canepa, the late owner of the Mill Valley Market, and has evolved over the years into a fest noted for its large selection of boutique wines and new food trends. Live music, too! June 24 at Depot Plaza, downtown Mill Valley. 1–4pm. 415.388.9700. www.millvalley.org.

Health Fair Sampler Visit the Veterans Memorial Building in Santa Rosa on June 30 from 10am-4pm, and purchase samples and tinctures from Sonoma County’s many health and wellness practitioners. Guests pay $20 for four samples, with 50 percent of the proceeds going to local nonprofits. For more information, visit HealthFairSampler.com.

Marin Outdoor Shakespeare Festival Prepare to be wowed with outrageous costumes and genteel-sounding dialogue peppered with dirty metaphors you may not get. The Marin Shakespeare Outdoor Festival features “King John,” “A Midsummer Night’s Dream” and “The Liar” from July 6–Sept. 30 at the Forest Meadows Ampitheatre in San Rafael. 415.499.4488 or www.MarinShakespeare.org.

Festival del Sole An astounding success in fine music, the Festival del Sole is back for its sixth year with a flourish July 12–22. The slate includes Joshua Bell, Danielle De Niese, the Russian National Orchestra, guitarist Ángelo Romero with cellist Nina Kotova and friends, youth ensembles, ballet, theatrics, festive meals and much more. Tickets run from free to $115. At various venues, but get to the Castello di Amarosa if you can. www.festivaldelsole.com.

Far West Fest Taking place at the aptly-chosen Love Field in Point Reyes, this year’s seventh annual Far West Fest features local vendors, mountains of oysters and three stages of performances by the Pimps of Joytime, El Radio Fantastique and many others. Since its inception, this community-focused festival has raised over $130,000 for local charities, so go party in the sun (or fog) for a good cause. July 21. FarWestFest.com.

Music in the Vineyards Now kicking off its 18th season, this three-week extravaganza brings together nearly 40 renowned violinists, cellists, pianists and other classical musicians from around the world. Aug. 1–19. Locations vary around Napa County. $45–$50 per show. $534 for 12 evening concerts. www.napavalleymusic.org.

Napa Valley Art Festival This juried art exhibit and sale features 26 representational artists from around the country, and finds guests sipping on Napa Valley wines and other delicacies while listening to live music. Aug. 18 at the Yountville Community Center, 6516 Washington St., Yountville. 707.256.3828. www.napavalleyartfestival.com.

Cotati Accordion Festival Use an accordion—go to Cotati! This year marks the 22nd festival of keys and bellows. Dick “the Accordion Man” Contino returns to the festival to play his squeezebox, as do the Mad Maggies, Alicia Baker, the BlackEyed Dempseys and many others. Aug. 18–19. La Plaza Park, Cotati. $15–$25; under 15, free. 707.664.0444. www.cotatifest.com.

Seafood Art & Wine Festival Bodega Bay celebrates for the 18th time with seafood and music. This event showcases the best of California’s wineries and breweries, artists and craftspeople, and, of course, the legendary rubber-duck races. Benefits Stewards of the Coasts and Redwoods and the Bodega Volunteer Fire Department. Aug. 25–26. 16855 Bodega Hwy., just east of the town of Bodega. $8–$15; under 12, free. No dogs this year. 707.824.8717. www.winecountryfestivals.com.