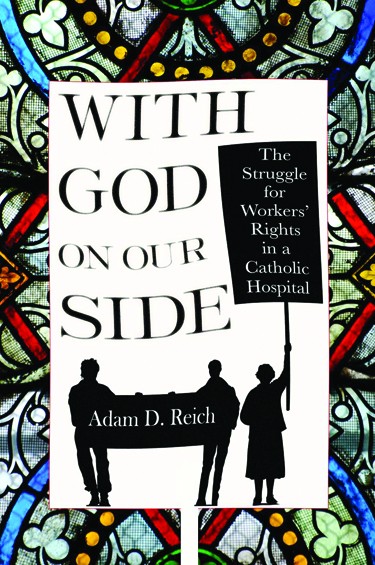 Some readers might be surprised to learn that one of the most dramatic union battles of the 21st century took place on Sonoma County soil, specifically the grounds of Santa Rosa Memorial Hospital. This is recent history, in fact. The effort to unionize began in 2004, despite concerted anti-union efforts by management and hospital religious leadership; it was a fight that finally resulted in a contract as members of the National Union of Healthcare Workers in 2010.

In his new book, With God on Our Side: The Struggle for Workers’ Rights in a Catholic Hospital, Adam Reich, a Ph.D. candidate in sociology at UC Berkeley, delves into the tumultuous history behind the unionization of hospital workers at one of the county’s largest hospitals. Interestingly, Reich credits the union for building a “powerful religious and political coalition to highlight the contradictions between the values the hospital asserted and its anti-union practices.” Eventually, in 2008, that smart maneuver won concessions from the hospital.

Still, this victory was jeopardized when the workers’ original backing union, the Service Employees International Union (SEIU)—the very organization that planted the seeds for initial efforts to give the workers a voice in patient care, benefits, working conditions and salaries—fell into disarray due to internal struggles, and turned against the union fight. But in the end, the workers prevailed, proving that community and dedication can prevail. Celebrate the conclusion of a nine-year union struggle and see Adam Reich speak about With God on Our Side on Friday, June 1, at the Peace and Justice Center of Sonoma County. 467 Sebastopol Ave., Santa Rosa. 6:30–8:30pm. 707.575.8902.