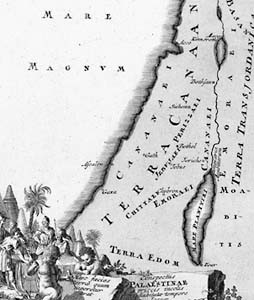 THESE MAPS, what they do is, they make history come alive.” Leaning forward in his chair, face lit up in a broad smile, Arnold Sternberg obviously has a passion for his subject. Of course, he’s not talking about the sort of maps that hung on the wall of your fourth-grade classroom. Rand McNally charts may do a fine job of tracking name changes in the volatile former Soviet Republics, but let’s face facts: The flat empiricism of modern maps doesn’t exactly inspire passionate engagement.

In this era of satellites, airplanes, and hand-held Global Position-ing Systems, we seem a long way from the ancient romance of the “Here there be monsters” that long-ago mapmakers once used to fill in blank spaces. Modern technology has replaced mystery and heroic exploration with coldly efficient accuracy. But Sternberg’s collection is something rather different.

Soon to be highlighted in a special exhibit co-sponsored by the Jewish Community Agency, the retired Santa Rosa resident’s maps date back to the 16th century and are the work of accomplished cartographers from some half a dozen countries.

These are not mere bloodless guides to political and geographic boundaries. Their elaborate charts, illustrations, and cartouches display a dramatic fusion of science, art, and religion. Oh yeah–and politics. After all, Sternberg’s maps exclusively chart the landscape of the Middle East, so, they naturally drip with rich history and contested terrain, both psychological and literal. Here we see a rebellious Jonah being tossed into the waiting maw of the infamous whale; the Egyptian army drowning in the Red Sea after the Israelites have safely crossed miraculously parted waters; and cedars from Lebanon being towed to Jerusalem to erect the Temple of Solomon.

Whatever these documents may lack in literal accuracy, they make up for with colorful illustrations of how dead centuries have interpreted the universe. “They are very different from the maps that people use nowa-days,” Sternberg says. “Many of them are hand-colored documents, very elegant, very finely drawn. They became works of art as they were updated and retired from active use. Every Dutch home, for example, used to have a map hanging on the wall.”

ANCIENT CARTOGRAPHY was a science of the sea. According to Sternberg, early cartographers often mapped from the ocean as they approached the coast. First the Dutch, then the Italians, the French, and then the British gave birth to great mapmakers as nations took their turns as the world’s dominant maritime powers.

Sternberg’s collection is a broad sampling from many of these styles and nationalities. Assembling a collection like this is no easy feat. It was, in fact, some 10 years of work for the tireless Sternberg. During daylight hours, he vigorously pursued a career in government service, coordin-ating California’s State Housing Department. But he also spent countless hours rummaging through the basement display rooms of antiquarian bookstores, sifting through theater posters and the remnants of estate sales in search of ancient maps of the Holy Land.

When he found something worth having, the haggling would begin.

“I certainly wasn’t a wealthy collector,” says Sternberg. “I just started buying maps before they were popular. Now many of them are so expensive that I can’t touch them.”

This burning passion for the cartography of the Holy Land was kindled in part by a stint in the Israeli armed forces. Sternberg served in the U.S. Navy during World War II and later fought in the 51st Battalion of the Israeli army during the hard-fought 1948 War of Independence. His unit helped break through the Jordanian siege of Jerusalem and then clashed with Egyptian forces at the north end of the Gaza Strip. Suddenly, a young man born in Boston was marching through places out of biblical legend.

Now, on the 50th anniversary of that war, one of Sternberg’s favorite stories is about how old maps helped win Israel’s independence. He relates with some relish how Israeli army commander Yigal Yadin (a noted archeologist) found a tricky solution to the problem posed by a well-positioned Egyptian army encampment in the Sinai Desert. Yadin studied ancient maps to discover an old Roman road, which he used to send a column of jeeps out behind the Egyptian base and mount a devastating sneak attack.

Sternberg’s dreams for his collection, however, now run more toward ending conflict in the Holy Land. He believes these documents are a powerful demonstration of the continuity of Jewish people’s attachment to this area. But he also sees signs of hope for peaceful coexistence in his collection. “Given what’s going on right now in the Middle East, I hope people will find some new insights in these maps,” Sternberg says. “The imprints of at least three different cultures, civilizations, religions are illustrated there. There was that coexistence then, and that does give you hope for the future.”