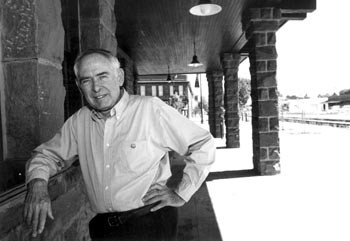 Notes from the undergound (plan): Transit advocate Lionel Gambill says Railroad Square merchants would be big winners in a plan to put Highway 101 underground between Steele Lane and the Highway 12 interchange.

Plunk Highway 101 underground? That may not be such a crazy idea

THERE’S AN ELEPHANT in the living room. It’s big, unattractive, and in the way, but the challenge of making it leave is too daunting for most people. It’s easier to work around the elephant, or simply to deny that there’s a problem with it being there.

The elephant is Lionel Gambill’s metaphor for Highway 101, or at least the elevated stretch between Steele Lane and the Highway 12 interchange. The city of Santa Rosa is the living room, a large and popular area that many people say is overdue for a redecoration. Just what shape that redecoration should take has yet to be decided. But the way Gambill sees it, any attempt to improve the downtown area will be fruitless if the freeway remains where it is.

The elephant, he says, has got to go.

“I’ve never seen an elevated freeway that didn’t create a blighted area,” Gambill says. “When did you ever say to your sweetie, ‘Honey, let’s go for a romantic stroll under the freeway’?”

A member of the Sonoma County Land Use and Transportation Coalition, Gambill, whom a colleague affectionately describes as a rabble-rouser, is spearheading a radical proposal to change the way downtown Santa Rosa looks. Instead of adding lanes to the freeway, as Caltrans has proposed, Gambill wants to move it into an underground tunnel. Where the freeway now runs, urban planners working with Gambill envision a surface-level, four-lane boulevard lined with trees.

This bucolic scenario is known as Option 3, in response to the two other options recently presented to the Santa Rosa City Council by Caltrans. The first of those options, rejected by the council, would have added lanes to the elevated section, closed several on- and off-ramps, and rerouted downtown traffic along roads running parallel to the freeway. The second option, a milder, less expensive version of the first, is still under review by Caltrans and appears to be the choice most council members favor.

But backers of Option 3 say that the Caltrans proposal would not improve the freeway situation, or offer the added benefit of reunifying downtown Santa Rosa and Railroad Square. They say that Caltrans admits–and several environmental reports confirm–that adding lanes would do nothing to relieve the traffic problem. Nor, they say, would it do anything to reunify the downtown area.

The elephant would still be sitting in the living room, larger than ever.

ORIGINALLY, supporters of the proposed four-lane boulevard had suggested making a freeway bypass west of Santa Rosa. But when council member Noreen Evans broached the idea of an underground tunnel, it was seized upon as a better solution–one that would reduce noise pollution, leave western neighborhoods undisturbed, and separate local traffic from through traffic.

“The key is to take the freeway out of the city,” says Laura Hall of Fisher & Hall Urban Design. “We need to equalize the car and the pedestrian.”

Her colleague, Lois Fisher, points to the town of Cloverdale, once split down the middle by Highway 101. A bypass opened in April 1994 moved the freeway to the outskirts. “People are starting to reclaim the town, now that the freeway isn’t dividing it anymore,” Fisher says.

Over the last five years, the way Cloverdale looks, works, and travels has changed considerably. Before the bypass, much of the business in town catered to freeway traffic; now that source of revenue is gone. Only one of the formerly ubiquitous gas stations has survived.

But Cloverdale has bounced back. Planning director Joe Heckel says that the town is more pedestrian-friendly now and boasts more services that cater to locals. “When the freeway went through town, it was like a fence,” Heckel says. “Particularly with holiday traffic, people didn’t want to cross from one side to the other. Now the downtown’s been handed back to the people.”

If there is a common chord in the many proposals for revitalizing Santa Rosa’s downtown, transit advocates say, it is the need to encourage alternate forms of transportation. The City Council, says urban designer Dick Carlisle, is committed to making pedestrians, bicycles, and public transit equal to automobiles–or at least evaluated equally. Under consideration are plans to reunify the halves of Courthouse Square, create a continuous bike lane from Fourth Street to the Santa Rosa Junior College area, and enhance smaller side streets to encourage pedestrian traffic.

In addition, Northwestern Pacific Railroad is planning to bring commuter trains through Railroad Square within the next five years. During fiscal year 2002-3, it is anticipated that 837 tourist trains will stop at the depot near A’Roma Roasters.

Gambill, a longtime rail advocate who led the opposition to the defeated 1998 ballot measure that would have funded transit improvements with a sales tax increase, agrees that creating alternatives to driving is essential. But he doesn’t think Santa Rosa should stop there. Without taking the freeway out of the picture, he says, the city will remain divided and decentralized.

AND WHAT ABOUT the cost of Option 3? Mayor Janet Condron estimates that such an ambitious project would cost upward of $100 million, more than twice as much as either of the Caltrans options. The potential price tag has dissuaded more than a few local politicians from supporting the proposal.

Gambill scoffs at the notion that the plan is too expensive. “The issue of cost is a diversion,” he says. “If the political will is there, the project will get built. They’ll find the money. They found the money to muck up our city; they can find the money to make it better.”

The real issue, he claims, is not money but quality of life. “Would you rather live in Paris or Houston?” he asks.

Part of the problem, Option 3 supporters explain, is that the public doesn’t know about the project. Evans says the council has not looked into the proposal seriously, and no studies have been done on its financial impact. And until a thorough cost-benefit analysis is done, the real price of Option 3 will remain unknown.

“We need more information,” Fisher says. “This should be a community process. Right now it’s being decided by a few people.”