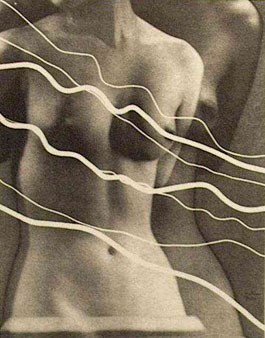 Lee Miller: Through the Mirror’ ($29.95; Facets Video) Pioneer female photographer Lee Miller led one of the 20th century’s most glamorous lives: she was a Vogue cover model in the 1920s, posed for Edward Steichen, learned to make her own pictures while living with Man Ray, appeared in Cocteau’s The Blood of a Poet, and wrote and illustrated powerful magazine articles about the liberation of the concentration camps. This 55-minute French documentary by Sylvain Roumette offers an introduction to Miller’s life, based on the archival work of Miller’s son, Antony Penrose (Miller was married to British surrealist Roland Penrose).

Most of the film consists of stills of Miller and her work discussed by Antony, along with a long reminiscence by American magazine photographer David Scherman, who enjoyed an affair with Miller (whose relationship with Penrose was extremely open) that he’s obviously never gotten over.

Too bad, though, that the son’s protective instincts seem to hide Miller from us. We see her mostly through the eyes of others, as if she where still the model who used to alternately fascinate and infuriate Man Ray. I don’t know if any film of Miller herself actually exists, but her own voice is missing from this biography. The set comes with a booklet containing two interesting pieces about Miller, including the director’s essay linking Miller to Stendhal’s heroine Lamiel. —M.S.G.

‘Shadows of Forgotten Ancestors’ ($29.95; Kino) Soviet-Armenian director Sergei Paradjanov’s 1964 masterpiece of life in the Carpathian Mountains, “forgotten by God and people,” tells the story, somewhere in the past, of the peasant Ivan (Ivan Mikolajchuk), who loses the love of his life, wanders in exile and participates in celebrations and lamentations. Eventually, Ivan marries a bright-eyed, faithless villager (Tatyana Bestayeva) who cannot lure him back from the ghostly appeal of the woman he lost. The Georgian filmmaker’s extraordinary sensuality combines the dreaminess of Vigo with the feeling for the natural world of Herzog.

Kino’s print of this much-mutilated film is very good, if not visually restored, and includes scenes that didn’t make it on to earlier video issues. The coming attractions include the good news that Paradjanov’s Legend of the Suram Fortress is also being reissued by Kino. A slideshow of the director’s fine art is beautiful as it is enlightening; less so is the underwhelming 2002 documentary Islands, comparing the career of Paradjanov with that of his great friend Andrei Tarkovsky (Solaris, Andrei Rublev) . Out-of-context film clips try to illustrate both artists’ sufferings at the hands of Soviet censors and judges. In Paradjanov’s case, they knew who they were after—Shadows of Forgotten Ancestors is perhaps the least Soviet movie ever made in the U.S.S.R. —R.v.B.

‘Slings & Arrows’ ($59.95; Acorn Media) The Canadian TV comedy Slings & Arrows ran for three seasons (2003–2006), totaling just 18 45-minute episodes. The box set (with an extra disc of interviews) will leave you wanting more but admiring creators Mark McKinney, Susan Coyne and Bob Martin for knowing how to bow out on top. Combining The Office and Waiting for Guffman, the show follows the fortunes, egos and libidos of the New Burbage Festival of Shakespearean Theatre.

McKinney plays the bumbling executive director with the ultimate nondescript name, Richard Smith-Jones. His administrative assistant, Anna (Coyne), is an overstressed but chipper office enabler who fixes the copy machine, rides herd on the interns and begrudgingly serves coffee. Artistic director Geoffrey Tennant (Paul Gross) suffered a breakdown during a performance of Hamlet seven years before and now lives in the theater’s storeroom. His one-time lover, Ellen Fanshaw (Martha Burns), is a neurotic diva.

The festival’s emeritus director, Oliver Welles (Stephen Ouimette), is run over by a ham-delivery truck early on but returns as a ghost giving Geoffrey staging advice. Visiting director Darren Nichols (Don McKellar of Twitch City) hates theater and favors Roland Barthes–style deconstructions, including a Romeo and Juliet in which the leads never look at each other.

Each season follows a single main play—Hamlet, Macbeth and King Lear— with the offstage antics mirroring the onstage text. In my favorite subplot, Richard, worried that the festival’s aging subscribers are literally dying in their seats, hires a New Age ad agency headed by a visionary named Sanjay (Colm Feore), who embarks on an ad campaign featuring billboard come-ons like “Bite Me” and “Piss Off.”

The show manages to be raucous, profane, witty and, best of all, really in love with the agony and ecstasy of putting on a play. —M.S.G.