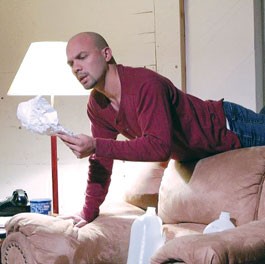 AlterTheater's memories of a marriage

Lauren Yee’s charmingly weird A Man, His Wife, and His Hat, a production of Marin’s acclaimed AlterTheater ensemble, blends an absurdist sensibility with strong elements of magical realism. It is nothing if not unconventional, but it works the way a dream works or a guided visualization: by finding truths that lie waiting beneath the surfaces. The result in this bold production running through Dec. 4 is part love story, part fairy tale and part psychological analysis.

The story follows a long-married couple—a crotchety hat maker named Hetchman (Jeff Garrett) and his long-suffering wife (Patricia Silver)—who haphazardly come to terms with the memories, good and bad, which they’ve collected over the course of their long, untidily ordinary marriage. In this play, however, memories come in jars. There is a talking wall (Nakissa Etemad), a puppy-like golem (Jonathan Deline) and a heartsick narrative voice (Jeanette Harrison), who turns out to have a fianc– so ungrounded by uncertainty he must carry heavy items in order to keep from floating away.

There’s also Hetchman’s best friend, Meckel (Ed Holmes), who likes to have ghost-watching picnics in the cemetery. It’s all pretty weird, but it’s also wonderful and, ultimately, incredibly moving. A Man, His Wife, and His Hat runs Wednesdays and Friday–Sunday through Dec. 4 at AlterTheater, 1414 Fourth St., San Rafael. Wednesdays at 7:30pm, Friday–Saturday at 8pm, Sunday at 5pm. $15–$25. 415.454.2787.