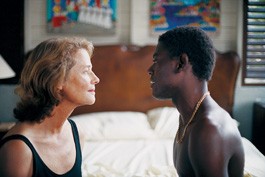 Heading South begins intriguingly in a prologue. In the late 1970s, at the Port-au-Prince airport, a woman approaches Albert (Lys Ambroise), the black-suited manager of a tourist-class hotel. Speaking very circumspectly, the lady offers her daughter to Albert. He can’t understand what she’s trying to give him or sell him: a slave? A prostitute? A daughter? A wife? In a few deft minutes, Cantet sketches out the unbearable injustice of the island, enough so that when Rampling later calls Haiti “a dungheap,” it doesn’t seem too extreme.

Albert would agree, though; the island has been repeatedly invaded by tourists with guns and money. In a voiceover interior monologue, Albert says that Americans have polluted everything they’ve touched.

Rampling’s Ellen may be disgusted by the island’s living conditions, but she doesn’t have any serious political feelings. She’s a French professor at Wellesley who loathes her job and only really lives when she’s on vacation. By the virtue of her attractive arrogance, she has claimed Legba (Menothy Cesar), the best-looking and most amiable of the group of young beach gigolos lolling around at Albert’s resort. Ellen buys him sodas, feeds him hotel food and takes him back to the bedroom at night.

Ellen believes she knows everything, but what she doesn’t realize is that the hotel’s new arrival, Brenda (Karen Young), a half-mad housewife, had a summer affair with Legba three years ago. What ensues is a tug of war in which Brenda has the advantage of compassion and Ellen, the advantage of force.Young played the FBI agent on The Sopranos who systematically destroyed Adriana. She has a square, unpretty face and she’s not a smiler. She’s firm and yet neurotic enough to make you believe the soap opera-ish side of Heading South–the idea of all-encompassing passion, the sort of love affair that leaves a woman wandering on a beach like a shipwreck victim, staring into infinity.

Legba’s side of the story is a little harder to fathom. He’s proud of earning money and he’s not passive. He’s sometimes allowed to get his own back, and you can imagine women going to see Heading South for all the wrong reasons.

The film is based on three short stories by the Haitian writer Dany Laferrière, a Quebec-based immigrant who also wrote How to Make Love to a Negro Without Getting Tired, made into a truly annoying movie in 1989.

Cantet previously directed Time Out, about a family man’s self-exile after he being laid off. Cantet has a similarly unusual subject here, and it’s almost 20 years since the last time someone took the topic on. A Winter Tan, from 1987, based on the memoirist Maryse Holder’s Give Sorrow Words, is also about a middle-aged woman heading to the tropics to find authentic, real men; in real life, Holder was killed in Mexico by one of her tricks.

Coming from a male perspective, Cantet has trouble explaining the pasts of the women who go to Haiti. The simplest of the women, Sue (Louise Portal), is there for the fun and the sex. But Brenda and Ellen reveal their backstories. Sometimes, it seems Cantet hasn’t really defined the women except as a set of yearnings: the imperious Ellen longing to dominate, Brenda longing to surrender and Sue longing simply to satisfy her ample flesh.

Cantet shoots on location and makes the dangerousness of the cities palpable. At a street market, when Brenda emerges from a taxi, everyone on the street turns his or her head at the same time at first sight of the stranger. The locations and the novel situation make it interesting, but it’s noteworthy really as a vehicle for Rampling, who knows how to play the hurt and bitchiness and make it invigorating and sexy.

Heading South is best as a contest between lionesses–Rampling’s proud one and Young’s wounded, sad one–but it’s Rampling who keeps one most engrossed as how the contest will end.