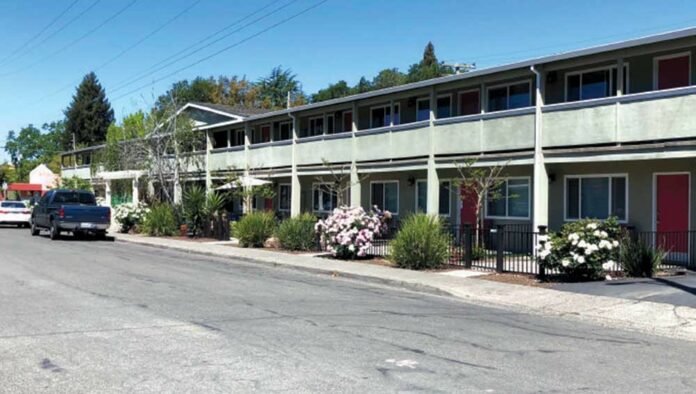 As the second month of coronavirus shelter-in-place orders come to an end and calls for a May 1 rent strike continue to circulate, the number of renters struggling to make ends meet is becoming clear. If no action is taken, millions of missed rental payments could trigger a series of devastating economic impacts.

That equates to approximately $12 million of potentially-missed payments each month.

The Terner Center data set does not offer similar data for any Marin County cities.

Prior to the crisis, 1.1 million Californians were already considered “rent burdened,” meaning they spent more than one third of their income on rent each month. The Terner Center study predicts an additional 1.1 million households could become rent burdened due to the coronavirus pandemic.“

The current crisis only exacerbates the vulnerability these cost-burdened households were already facing, putting them at greater risk of housing instability,” the Terner Center study states.

Although the federal government has increased Unemployment Insurance (UI) benby $600 per week, much of that money may end up going to rent. Due to the high cost of housing in California, renters will still pay a ant portion of their bento their landlord, even if they do qualify for the highest level of UI benaccording to the UC Berkeley analysis.

With rent averaging $1,580 per month, a family quafor the lowest amount of benwill spend 65 percent of their monthly check on rent. If they qualify for the highest level of benthey will spend 38 percent of the check on rent, an expense level which will still leave them rent-burdened.

In March, local, state and federal lawmakers and agencies created a patchwork of partial protections for renters and landlords but, weeks later, the holes in that system are becoming apparent.

Marin, Napa and Sonoma counties each have different ordinances, but the strongest protection in California came in the form of an April 6 order from the State Judicial Council, the board that governs the state’s courts system. That order bars all courts from processing eviction and foreclosure cases until 90 days after the crisis.

Still, there are many unanswered questions, says Ronit Rubin, the executive director of Legal Aid of Sonoma County.

One of Rubin’s primary concerns is that, under the current orders, tenants will still be required to make up all of their missed rent payments after the orders are lifted. If tenants are unable to pay the back-rent after the Judicial Council’s order is lifted 90 days after the crisis, landlords could begin pushing ahead with eviction proceedings based on the tenant’s inability to pay back rent. That could lead to a wave of evictions across the state, likely hampering the economic recovery by worsening workers’ ability to return to work after the crisis.

“If we open businesses back up but half of their prior are now gone or destabilized because they don’t have a place to live, how does that affect the businesses’ ability to gear back up and have again?” Rubinsays. “I don’t think that makes reopening particularly easy.”

Landlord groups in turn argue that, if tenants miss their payments en masse, landlords will miss their mortgage payments.

The looming question is: What will happen if hundreds of thousands of tenants are unable to make up their missed rent payments due to long-term unemployment? In recent weeks, both landlords and tenants have turned to lawmakers for a solution.

According to an April 17 California Apartment Association (CAA) press release, State Senator Lena Gonzalez plans to amend Senate Bill 1410, a preexisting housing bill, to create a temporary state program to pay landlords for some missed rental payments. Similar to current, local North Bay protections, the temporary COVID-19 Emergency Rental Assistance Program would require renters to demonstrate “an inability to pay rent due to COVID-19 or a government response to the COVID-19 pandemic” in order to qualify for the program, according to the CAA release. Details of the proposal have not yet been released.

At the federal level, Minnesota congresswoman Ilhan Omar introduced legislation to cancel rent and mortgage payments—including missed payments in April—for millions of people across the country.

Omar’s legislation, the Rent and Mortgage Cancellation Act, would establish a fund for landlords and mortgage holders to cover losses from the cancelled payments and set aside funds for local governments and nonprofits to purchase private rental properties.

“We must take major action to protect the health and economic security of the most vulnerable, including the millions of Americans currently at risk of housing instability and homelessness,” Rep. Omar said in a press release.