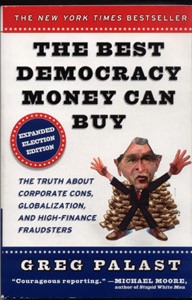 Every Reason to Be Paranoid: It’s actually worse than you think.

Mightier than the Sword

Journalist Greg Palast is one of truth’s last crusaders

In these days of money-poisoned politicians, oil-hungry corporations and the hysterically unbalanced corporate media, Greg Palast remains one of the few real investigative journalists left on this planet. He asks questions people don’t want to answer, and he writes stories that people don’t want to talk about: how Katherine Harris stole the Florida election for Bush by illegally purging thousands of legitimate voters from the rolls; how Ken Lay persuaded Arnold Schwarzenegger to settle the state’s lawsuits against the energy companies for pennies on the dime, letting Enron off the hook for the $9 billion they stole from California; how, in the summer of 2001, Bush deliberately shut down the intelligence unit tracking Saudi funding of al Qaida.

That last story, in particular, topped the BBC Nightly News and took home Sonoma State University’s Project Censored Prize for a report simply too hot for the U.S. media. Accordingly, Palast appears at SSU in benefit of Project Censored on Wednesday, April 28.

Palast presents rock-solid evidence to back these stories up, yet you’ll never see his name in the mainstream press. An American, he publishes most often in Europe because his reports are ignored by the watered-down American news organizations. The networks won’t touch him with a 10,000-foot pole.

And to the sheer ire of the powers that be, Palast is not going away. Just a few days ago he released an “expanded election edition” of his book The Best Democracy Money Can Buy: The Truth about Corporate Cons, Globalization and High-Finance Fraudsters (Plume; $14). The book contains new material just in time for an election season shaping up to be a bloodbath.

Perhaps the scariest new material discloses the machinations behind the Help America Vote Act, a law passed by Congress instructing every state to computerize, centralize and purge voter rolls before the 2004 election–which means the Florida scenario could be replicated nationwide, and we might see the most questionable and unverifiable election in this nation’s history. And as folks are finally starting to point out, the companies who manufacture the electronic voting machines are huge contributors to the Republican Party.

As if that wasn’t disturbing enough, Palast also managed to get a hold of 100 pages of the State Department’s secret “Iraq Strategy,” dealing with the “postconflict” economy of Iraq, written long before we were told there’d be a war there. Quoting the State Department’s document, Palast reports that their “strategy” lays out a detailed 270-day schedule for grabbing all “asset sales, concessions, leases and management contracts, especially those in the oil and supporting industries.” He says what this tells us is that “if Bush didn’t go into Iraq for the oil, he sure as hell ain’t leaving without it.”

Undoubtedly, Palast is written off by mainstream conservatives as one more clown engaging in attack-Bush hysteria, as if there was nothing to attack. But he goes after Clinton as well. His investigation of Clinton’s secret Indonesian money trail–six-figure payments to Hillary’s former law partners by the Riady family of that country and Entergy International of Little Rock, Ark.,–is something, again, that- never made it to any mainstream media outlet. According to Palast, that mess alone would have resulted in Clinton’s impeachment, but the Republicans on the Senate Governmental Affairs Committee called off their investigation as a trade-off for the Clinton Justice Department’s scrapping an investigation of potential criminal activity by Koch Industries, a monster secret benefactor of the Republican party.

Palast, consistently about two years ahead of the U.S. media, is one of the last true outlaw journalists not afraid to take on the big boys. His methodical Columbo-like snooping continues to irritate corrupt officials, and he should be applauded for it. We need more folks like him.