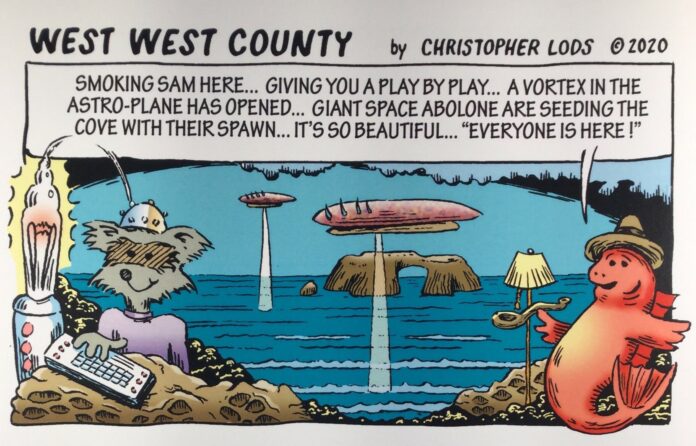 There’s West Sonoma County, and then there’s “West West” Sonoma County. That’s where artist and musician Christopher Lods lives, out on the coast at Goat Rock; and it’s what inspires his illustrations and hand-done art that adorns the signs and the walls of businesses throughout the region.

“West West County is a special place to me,” Lods says. “This is where I live and this is where I love, and people are a little bit different here. There’s a lot of good vibes going on.”

Originally from Indiana, Lods first moved to California in 1986, living in Lodi before relocating to Sonoma County 25 years ago. It was in Lodi where Lods learned the art of sign-painting from old-time artists.

“Back in those days, everything was done by hand, even making patterns and drawing letters,” Lods says. “I learned all those old-school techniques and I still use them today.”

Bringing that skill to the North Bay, Lods’ work can be seen all over HopMonk Tavern in Sebastopol, Howard Station Cafe in Occidental and numerous other local spots.

Lods currently apprentices under cartoonist Thomas Yeates and works alongside Yeates on the present run of the long-running comic strip “Prince Valiant,” regarded as one of the most impressive visual comics ever syndicated. With Yeates’ tutelage, Lods is learning to master skills like using quills and working with India ink, and Lods is also helping color the comic strip.

“In the comic-book industry, there’s a writer, a penciler, an inker—that’s like Thomas—and there’s a colorist and a letterer,” Lods says. “Those people work together to create the comic, and it’s still done that way. It’s been an amazing thing, and I’m really having fun doing it. That’s where ‘West West County’ comes from, learning how to do all that.”

The characters and content of Lods’ “West West County” comic came to him in a dream back in July.

“I woke up in the middle of the night, and it was kind of all there,” he says. “I got up and laid out the first one, finally got to bed, woke up in the morning and inked it, scanned it and colored it.”

Centered around a coffee shop, the Deepwater Cafe, Lods’ comic is packed with animalistic characters with names like Surf Skunk, Smoking Sam and Fly Guy; all of whom engage in activities ranging from cycling up Joy Road to drinking astral-projected coffee to being abducted by giant Space Abalones.

“My characters are a little bit crazy, and exciting and strange things happen,” Lods says. “I don’t know where the ideas come from, it’s like an unexpected gift. It’s innocent and it’s fun, and maybe there’s a little politics in there, maybe not. You’ll have to decide for yourself on that one.”