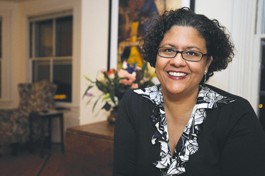 According to Obama’s inaugural poet Elizabeth Alexander, “Poetry is what you find in the dirt in the corner, overhear on the bus, God in the details.”

It also happens to be something you can find later this month at the 29th annual Napa Valley Writers’ Conference, where Alexander (above) will be on faculty.

In the spirit of Alexander’s democratic and pluralistic verse—her inauguration poem “Praise Song for the Day” celebrated everyone from sock darners to lettuce pickers—the conference invites the community to attend its faculty’s lectures and readings. That faculty, too, could be plucked from the very greatest of American, Whitmanesque verse. Not only does it include the chosen poet of the first African-American president, the faculty also consists of a Chinese-British-American novelist, a North Bay Buddhist modernist and a cyberpunk author giving a lecture called “Urban Legends, Pornography and Literary Fiction.”

They are also quite the praiseworthy bunch. Peter Ho Davies, the Chinese-British-American novelist of 2007’s Welsh Girl, is the recipient of Guggenheim fellowships, an O. Henry Award and was named in the journal Granta as one of the “Best of Young British Novelists.” The North Bay Buddhist modernist Jane Hirschfield and author of six collections of poetry has been lauded by the likes of the Guggenheim and Rockefeller Foundation as well as the Academy of American poets. Robert Boswell, the “Urban Legends, Pornography and Literary Fiction” guy, has published seven novels and a prize-winning play called Tongues while heaping up two NEA fellowships and numerous other prizes in fiction. Also at the conference this year are poets Carl Dennis and David St. John, as well as novelists Antonya Nelson and ZZ Packer, whose accolades and honors are also really impressive—trust us.

Conference director Ann Evans hopes that the high profile of some of this year’s faculty will attract an even more diverse crowd as almost every high school and college student in the area saw Alexander read on Inauguration Day; that may draw them. Also worthy of praise: with student id, all events are free.