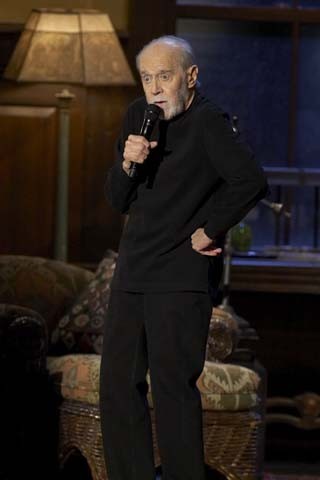 Now that he’s attained the septuagenarian rank of “old fuck,” and like old fucks since humanity’s rude beginnings, will next become a dead fuck, it’s pardonable to take the long view of a George Carlin show and cite a few precedents. But first a rundown Saturday night’s “It’s Bad For Ya,” concert, broadcast live for HBO from the Wells Fargo Center for the Performing Arts. It was a sellout. Carlin got a standing ovation—twice; once in the beginning and once at the end of his hour-long performance.

So on to the precedents. George Carlin comes from that rarified but ill-bred family charged with social criticism and satire. Picture Lenny Bruce shooting up, then reading and regaling our Constitution before a sellout crowd at Carnegie Hall. Lenny was Carlin’s dad. But Lenny never knew his comedic father. Lenny was so obnoxious as a kid that Dad abandoned him. Rumor has it that Lenny’s father was a Hitler look-a-like named Chaplin. And Charlie Chaplin was begot by Twain, and if you’ve never read Letters From Earth, you won’t know what I’m really talking about—so get a copy, and also by Ambrose Bierce, the infamed author of the Devil’s Dictionary, who was begot by Swift, who was begot by that randy monk Rabelais, then before him Chaucer, Boccaccio, Persius and everyone’s favorite Greek cynic, Aristophanes. Somewhere out there, right now, Carlin’s own kid is stirring up shit. I don’t know who he is, but just like the Dalai Lama, we’ll know when it comes time to pass the torch, cuz like Carlin and his seven Supreme Court words, and every last one of his son-of-a-bitch forebears, Carlin’s kid’s headed straight for the kind of trouble and no good that’ll have us rolling in dark, morbid hilarity, ironically illuminating our entirely pathetic existence.

Like Carlin says, “It’s all bullshit. And it’s bad for you.”P. Joseph Potocki