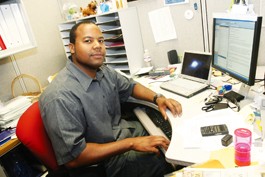 This generation doesn't understand a lot about money, but does like to spend it. The result can be tens of thousands of dollars in debt that won't go away

He was your typical college kid, persuaded to sign up for his first credit card right there on the college campus. It didn’t take long for Rance Bobo to max that card out when he bought a bike. After that, he signed up for a few more cards, using them to buy clothes and stuff for school.

The debt started catching up to him, so he decided to take out student loans to pay it off and help make ends meet. By the time Bobo left college, he was $20,000 in the hole. That didn’t stop him from taking out another 20 grand for a car loan.

More than a decade later, Bobo, now 30, is still chipping away at his $30,000 tab. Even if he is saddled with debt, with no end in sight, Bobo’s not losing any sleep over it. He finds it hard to save money, and is often tempted to spend it on nice clothes and the latest technology.

He describes his penchant for living beyond his means as a mark of his generation, one made up of folks who will drop $4 on a coffee drink without a second thought and who pride themselves on having the latest gadget in hand.

“With our generation, it’s ‘What do you need? What do you want?'” says Bobo, sitting outside the office at San Jose State University where he works as a counseling coordinator.

“I’m trying to take care of my debt, because I want options,” he says, “but there are these new pants I have been eyeing for months. They are 80 bucks. But man, I’ve got to have them.”

Our grandparents understood the value of a dollar. They stashed coins in piggy banks and contributed to their savings accounts. That’s when credit cards didn’t exist and borrowing money to buy a car was out of the question.

What happened to that old-fashioned American virtue called thrift? Americans have taken the term “living beyond our means” to a whole new level, as we continue to live with debt and no savings.

This is particularly true among young professionals. In a recent survey of 5,000 Gen X-ers conducted by Charles Schwab, roughly 25 percent said they are living paycheck to paycheck, while 17 percent said they follow the “spend now, pay later” code. Those numbers might not seem to indicate a problem, but less than 15 percent described themselves as “cautious savers.”

George Loewenstein, a 53-year-old professor of economics and psychology at Carnegie Mellon University, says that younger generations have a completely different outlook on spending and saving than even his generation. “There has been a sea change in the attitude toward debt,” Loewenstein says. “Perhaps the young people are going to reach a point of desperation, and they will realize they cannot sustain a lifestyle they want using debt.”

A study released in April by the Journal of Consumer Research titled “Tightwads and Spendthrifts” showed that younger generations have different spending and savings habits than their grandparents. The study showed that people between the ages of 21 and 30 were more likely to be spendthrifts, meaning they chronically spend beyond their means. The older generations were more likely to be tightwads, or save beyond their comfort level.

Of the 13,300 people surveyed nationally, those who were over the age of 70 were most likely to be tightwads, regardless of their income level, according to the study. Could this mean that as we age, we get a better handle on savings and spending habits?

“That is the big question we can’t answer yet,” says Scott Rick, a lecturer at the University of Pennsylvania’s Wharton business college who co-authored the study. Rick suggests aversion to spending might have more to do with history than with age. “Is it generational, and people over the age of 70 are tightwads because of their upbringing and the Depression?”

Some experts say it’s just that. The fact that baby boomers never experienced the true economic hardships that their parents faced might explain why they have not developed good savings habits. Being born in a generation where you were forced to live within your means sticks with you throughout life, these financial experts say.

However, Rick says there’s no evidence that tightwads were always tightwads. He and other researchers plan to do follow-up studies to determine whether spending and saving habits are generational.

One thing is for sure: Younger generations are strapped with more financial burdens than their grandparents, such as the skyrocketing cost of education. That, as well as the growing disappearance of pension plans, has forced many young professionals and college students far into debt.

Nearly 66 percent of undergraduate students have some debt upon college. In 2004, the average student-loan debt among graduating seniors was $19,237, according to the National Postsecondary Student Aid Study. That is up from 1997, when studies showed the average student loan debt was about $11,400.

There is psychological effect to that. When someone has so much debt in one area, it becomes easier to take on debt in another area. A study released last month by Nellie Mae, a Massachusetts-based education-financing company, found that more than nine in 10 graduate students had at least one credit card last year with an average balance of $8,612.

“I have $45,000 in debt,” said one recent college grad. “A lot have so much college debt, so what’s another couple hundred?”

“It’s near crisis,” said Robert Duvall, president of the National Council on Economic Education, a New York-based financial-education group. “The fact that credit card debt keeps spiraling upward and personal bankruptcy is going up for people at a young age, and there is a negative savings rate in this country—this is a significant yellow blinking warning light for the nation.”

Credit cards are much to blame.

The credit card as we know it today emerged in the mid-1960s. Most Americans had easy access to them by 1980. Analysts have watched the savings rate quickly drop as more Americans got credit cards. Today, most college kids can get their first credit card when they walk into their campus bookstore.

That’s what happened to 21-year-old Diamond Richards, who now has more than $55,000 worth of debt, including medical bills and credit card payments. Richards had already blown through some of her college money by the time she got to Evergreen Valley College a few years ago. She was on financial aid and in need of money. So she signed up for credit cards and continued buying things, maxing three credit cards to purchase clothes, shoes and whatever else she wanted. When she started getting statements and bills she couldn’t afford to pay, Richards realized she needed to put an end to her spending sprees.

She cut up her credit cards. And now she is trying pay off what she owes, slowly.

But still, like many of her friends, Richards doesn’t feel that debt is something to worry about; it’s just a part of life. “I don’t stress about it,” she says.

The lack of savings among Americans is not just a personal problem; it’s bad for the national economy, according to Ronald Wilcox, author of Whatever Happened to Thrift: Why Americans Don’t Save and What to Do About It. Easy access to credit cards, and the fact that people can finance almost anything from a washing machine to a pound puppy, has created a false sense of wealth, Wilcox says.

It’s something that policymakers need to address, he says. Although there have been some attempts to establish credit card reform, Wilcox says, what the government needs to do is create incentives for people to save money. He points to Barack Obama’s plans to bolster savings among Americans.

Obama proposes requiring small businesses to offer automatic deduction pension plans similar to what larger companies offer. Another plan would allow anyone who makes $75,000 or less to deposit up to $1,000 annually in an IRA and the government would match it.

“There has to be some government intervention,” says Wilcox, who is also a professor of business administration at the Darden School of Business at the University of Virginia. “It’s a large public-policy problem.”

Another part of the problem is that young people don’t have basic budgeting skills. Nobody has taught them about money and investing. They don’t know the difference between “good” debt and “bad” debt. Economists know that taking out loans to pay for a college education is good, while racking up credit card debt to order pizzas and buy new shoes is bad. Many members of Generation X and Y apparently haven’t figured that out.

There’s no reason to believe the next generation will be any better about spending and saving money. In a recent Charles Schwab survey of 1,000 American parents and teens between the ages of 13 and 18, roughly 30 percent said their parents talk with them about money and budgeting. Still, most teens said they have more knowledge about how to use a credit card than how to pay for college.

About 45 percent of teens surveyed said they know how to use a credit card, while only 26 percent said they actually understand how credit card fees and interest rates work. Moreover, only 7 percent of those teens said they could go a week without spending money.

What this country needs is a greater push for financial literacy, Duvall says. Not just your basic Econ 101 classes, which focus on big economic issues, but courses on personal finances—how to budget, save and dodge unnecessary debt.

“Some say that finances and how to spend your money is something that parents should teach,” Duvall says, “but the fact is that a lot of parents are in trouble.”

That’s true for Ryan Lundell. The 27-year-old bartender says nobody really talked to him about budgeting when he was growing up. But that didn’t matter. He learned to stay away from credit cards by watching family members and friends get mired in debt.

Throughout college, Lundell managed to remain an atypical tightwad for his age, only shelling out money for things he absolutely needed. To this day, he doesn’t own a credit card, fearing it would get the best of him. “If I can’t pay for it, I don’t buy it,” he says.

But staying out of financial trouble doesn’t require becoming a tightwad. There are ways to enjoy life and still keep your head above water.

Experts say younger generations need to start saving money now. A good way to track spending habits is to carry cash, and use a debit card instead of a credit card. After getting paid, put some money into a savings account.

Even packing lunch and cutting back on coffee can go a long way. Part of the problem in spending is that consumers have lost sight of how the small purchases, such as $4 cappuccinos, can add up.

“We have difficulty understanding the cumulative effects of small things,” says Loewenstein. “If you eat one bag of Doritos, it won’t make you fat, but if you eat a couple bags per day, it will make you fat. It’s the same thing: a latte or two won’t make you broke but a couple lattes every day add up.”