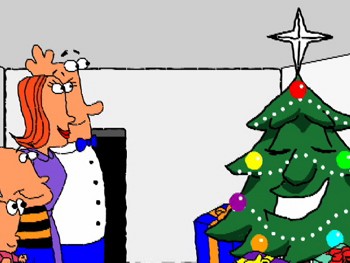 Petaluma animator Gene Hamm finally gets his due

For years, animator, composer, writer and voice actor Gene Hamm has been working quietly away on various solo animation projects. His animation studio, whimsically dubbed “Hammination,” is a small one, measuring only a few square feet all around. It is, in fact, his computer, on which he designs and animates his films, and also records the music and voices for each project. He composes and sings the music himself (with a couple of exceptions), and he also performs his character’s voices—every single one of them—by digitally altering his own voice. If such a one-man process seems a bit lonely, Hamm insists that the loneliness is nothing compared to the thrill of thinking up an idea, sketching it out and bringing it to life in a matter of minutes, without any outside interference

“Robert Rodriguez, the director of Spy Kids and Sin City, calls this kind of computer work ‘filmmaking at the speed of thought,'” says Hamm, seated in his Petaluma home. This isn’t to imply that the process is in any way instantaneous. In fact, Hamm’s first animated feature, the 52-minute, animated musical-fantasy The Dream Hat, took five years to make.

A throwback to trippy animated classics like The Point, The Phantom Tollbooth and Yellow Submarine, the film features clever songs with titles like “Shoe Suede Blues” and “Surrealestate.” The Dream Hat has been moving through the film-festival circuit, and on Dec. 13 was screened in New York at the School of Visual Arts.

According to Hamm, whenever he screens the film, people fixate on the notion that the work is a literal one-man show. Audiences seem especially engaged by the revelation that Hamm does all the voices: men, women, children, animals.

Hamm has been an animator and artist since college, and has worked on numerous projects, including the Gumby television series, The Smurfs, Ralph Bakshi’s animated version of The Lord of the Rings and the Dick Tracy video game by Sega. He teaches animation at the Academy of Art University in San Francisco and has produced a do-it-yourself comic strip DVD (a perfect stocking stuffer!) titled Cartooning: Shortcuts, Formulas & Cheap Tricks! ($24.95), in which budding cartoonists can learn to create their own comic strips.

He’s also created a how-to video for novice animators. Titled Amiga Animation Hollywood Style ($24.95), the video covers all the basics of various forms of animation. Both the DVD and the video are available through Hamm’s website or at Early Work toy store in Petaluma (601 Petaluma Blvd. N., Petaluma, 707.765.1993).

On the website, curious animation fans can check out samples of his work, including a video clip taken from The Dream Hat (it’s a song sequence that strongly resembles the old Schoolhouse Rock–style of animation) and a charming, brand-new holiday short titled The Conceited Little Christmas Tree. The three-minute Little Tree short had its world premiere last week, on Dec. 11, at the Los Angeles International Children’s Film Festival.

Hamm’s agent is currently shopping The Dream Hat around Hollywood, with hopes of it becoming a home DVD or even a pilot for a series. It may end up serving as a “calling card” to show what he can do as a creator-composer-animator. In fact, a number of producers have already talked to Hamm about collaborating on a number of projects.

“I’d like to see the film be released in theaters,” he says, “but if it ends up only being as a calling card, an example of what I can do, and it that ends up leading to other work, I suppose my little project will have served a purpose.”