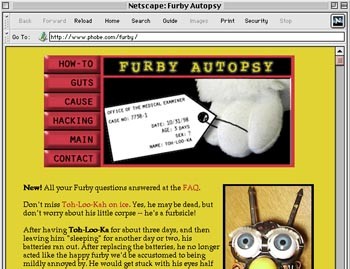 Nuke a furball in virtual space

By H. B. Koplowitz

IT WALKS, it talks, it sings, dances, eats, burps, and farts. If you can find it. It is Furby, the interactive plush virtual pet from Hasbro subsidiary Tiger Electronics, heir to the Cabbage Patch Doll, Beanie Baby, and Tickle Me Elmo. It’s the can’t-get-it gift of the holiday season. There are places online, some of them even legitimate, offering to sell you Furbies, but at many times the suggested retail price of $29.95. There are also websites documenting every aspect of the Furby phenomenon, and some anti-Furby websites as well.

Furby has been variously described as a hideously homely stuffed animal, a Mogwai too ugly to make it out of the Gremlins prop room, and a cross between Chucky and an Ewok, or Urkel and RuPaul. As cuddly as a squat, furry flashlight, the cantaloupe-sized virtual pet is stuffed with enough sensors and switches to work on an auto assembly line. A motion sensor causes it to “wake up” when it is handled, a microphone enables it to respond to sounds, and a light sensor lets it get “sleepy” if you turn off the lights. If it hears music it might say “Dance! Boogie! Do-do-do!” and do a jig, and buttons under its nappy fur make it giggle when tickled and purr when petted.

A motor animates its ears, eyes, legs, beak, and annoying voice. And a computer chip coordinates its actions and enables it to “learn,” or at least be programmed to speak 800 words, plus its own insipid language called Furbish. And if you pet Furby whenever it sings a bar from “Strangers in the Night,” it “learns” to murmur “dooby-dooby-doo” in eerie homage to the Bud Ice penguin.

The official Furby website, Furby–The Interactive Pet!, has a Furbish-to-English dictionary, plus the story of Furby, which makes as much sense as Furbish. There are also hints, tips, and interactive instructions for getting your Furby to perform its full array of tricks, and how to turn the damn thing off.

Furby and Friends Unofficial Fan Page is a non-commercial site “devoted to the FIRST Interactive Furball!” It claims to be the largest Furby site, with a list of stores carrying Furbies, Furby tricks and tips, sound and pictures, online postcards, message boards, pen pals, and a mailing list (“FurbyFriends”). It also has a link to the online auction website eBay, which has sold more than 6,000 assorted rare, new, and used Furbies and accessories since the craze began this fall.

Furby World has Furby stories and pictures, Furby names and colors, Furby accessories, and a list of “Easter eggs,” or undocumented features built into the toys. For example, according to “Mark and Bill,” if you feed your Furby three times and rub its back, it will burp eight times.

TAKING A MORE cerebral approach is The Fabulous Furby Fan Page, which provides a history of “Audio-Animatronics, Androids, and Robots” back to 1738, when Jacques de Vaucanson created a duck that could walk, flap its wings, chew and swallow food, and even poop. It also examines the similarities between Furbies and the movie Gremlins, lists new interactive toys deemed to be “Furby Wanna-Bes,” and discusses the relative merits of Furbies and Beanie Babies.

Furby may be the most technologically advanced toy on the planet, providing a glimpse into our Jetsons future, where robot pets, robot maids, and robot party dolls will become as commonplace as the real thing. For now, however, the Furby seems to have less in common with Blade Runner than Chatty Cathy and Betsy Wetsy, and there’s a brewing backlash of Barney proportions.

Exhibit A is Furby Autopsy, in which one Furby owner describes the strokelike symptoms of a Furby named Toh-Loo-Ka: “After replacing the batteries, he no longer acted like the happy Furby we’d been accustomed to being mildly annoyed by. He would get stuck with his eyes half open and emit a mild buzzing noise. … So we did what any bereaved Furby owner would do … we cut him up and took pictures.”

In lurid detail, the website describes how to skin, remove the ears, and breach the carapace of a Furby, then shows the inner “guts and stuff,” and finally attributes the “cause of death” to a broken gear arm. Scariest of all, there is a Frankenstein-like vow to “reconstruct this function in an effort to bring Toh-Loo-Kah back into our lives.”

Finally there’s Mission Briefing: FUBAR Furby, which puts Shockwave software to good use, allowing you to nuke a Furby in a virtual microwave oven. Using a variety of deadly weapons, at the “Assassin” website you can also take out Leonardo DiCaprio, the Spice Girls, Jenny McCarthy, Snoop Doggy Dogg, and Tupac Shakur.