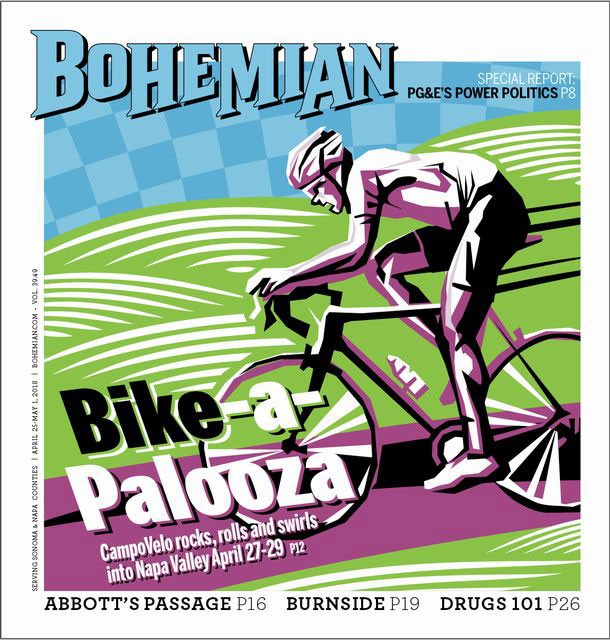 Napa Valley is obviously well-known as a food and wine destination, but because it’s flanked by mountains and crossed by winding roads that thread through picturesque vineyards and small towns, it’s also a haven for cyclists—provided you can avoid the weekend traffic jams. This weekend Napa will be jammed with cyclists of all kinds as CampoVelo rolls into the area for its second year.

CampoVelo is Coachella for cyclists. Held April 27–29, the event is a three-day celebration of food, wine, cycling, music and philanthropy. There are activities for non-cyclists as well. (The Bohemian is a media sponsor of the event.)

“It’s really about enjoying being outdoors, whether you’re cycling or going on a hike or doing some yoga,” says co-founder Chris Cosentino, celebrity chef and avid cyclist. “It’s all about community, conviviality and giving back.”

For gearheads, the event is stacked with a variety of rides for different skill levels and on different surfaces: road, gravel and dirt. Cosentino’s remarks about giving back is in reference to No Kid Hungry, Chefs Cycle, the Napa Valley Vine Trail and World Bicycle Relief, philanthropic groups that are beneficiaries of CampoVelo’s various fundraising dinners and events.

Of course, this being Napa, there will be plenty of opportunities to geek out on wine. Rebekah Wineburg, winemaker for Quintessa, will participate in a panel discussion at one of Saturday’s “Speakeasy Sessions” at the Calistoga Motor Lodge. She’ll be joined by winemakers Steve Matthiasson and Bertus Van Zyl, and Iron Chef America winner Neal Fraser.

“[The event] is really interesting to me because of the combination of food, wine and fitness,” Wineburg says.

While she’s not a cyclist, Wineburg will lead a hike Saturday up Calistoga’s Oat Hill Mine trail. Saturday. “I really like the connection between healthy lifestyle and food and wine.”

Many of the event’s rides will be led by professional cyclists, Ironman winners and other elite riders. Ted King, a former Tour de France competitor who now lives in Marin County, will lead Friday’s 30-mile gravel-road ride along Lake Hennessey and Saturday’s fast-paced, 43-mile “Espresso Train” ride on the Silverado Trail from Calistoga to Rutherford.

“Riding in the Napa Valley is amazing,” says King. “It’s some of the best riding in America.”

As a professional cyclist for 10 years pedaling through Europe, King had to forego all the great food and drink the area had to offer in the name of training. Those days are over now. He says CampoVelo matches great cycling and plenty of great food.

Saturday also features a race at the Calistoga Speedway patterned after the “Little 500” race depicted in the classic cycling film Breaking Away. Just like in the movie, teams of four will compete on flat-pedal, single-speed bikes. The event will feature food trucks and live music, and proceeds will help the Napa Valley Vine Trail, a nonprofit group working to build a paved bike path from Calistoga to the Vallejo ferry.

Cosentino will be on one of the teams competing on the speedway. I knew he had a talent for turning beef heart, tripe and other typically cast-off animal parts into delicious plates of food. I didn’t know he was once a professional mountain biker and solo, 24-hour endurance racer.

Chefs are generally a driven, hyperactive bunch who put in extremely long hours to create indulgent experiences. With three restaurants to his name (Cockscomb in San Francisco, Acacia House in St. Helena and the new Jackrabbit in Portland, Ore.), a line of cooking knives, a writing credit for a Wolverine comic book and a Top Chef Masters win, the extreme-mountain-bike-racer thing makes sense.

Cosentino rose to fame as the offal-loving chef at the late Incanto, a beloved San Francisco restaurant that put him and lesser cuts of meat on the map. After the birth of his son 13 years ago, he put the brakes on cycling and focused on his culinary career. But he’s returned to his love for cycling in recent years, and this weekend, Cosentino’s love for bikes and food ride in tandem at CampoVelo.

Cosentino lives in San Francisco but rides in Napa Valley regularly with his friend and Napa frame builder Curtis Inglis.

“He takes me on all these crazy, amazing road rides,” Cosentino says. “But there’s also riding at Skyline [Wilderness Park] and these gravel rides he takes me on which I don’t even know the names of. I just follow him, and that, to me, is the most fun, that sense of adventure. . . .There’s nothing like it. It’s just incredible.