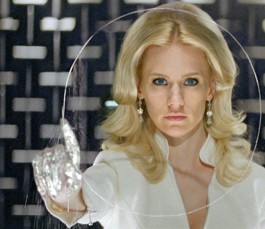 Overloaded and over-charactered, X-Men: First Class is a movie about the 1960s, and like all recent movies about the 1960s, it assumes that every historical moment in that decade happened at the same time. Nonetheless, Cold War paranoia and the Cuban Missile Crisis add historical resonance to the dispute between mutants and humans.

James McAvoy is the young Professor Xavier, the world’s most powerful psychic; Michael Fassbender is the bitter Erik, later to become master of magnetism, Magneto. The conflict of two worthy adversaries evokes the dispute between Martin Luther King and a young Malcolm X, and CIA liaison Moira (Rose Byrne) and the mutant Raven (Jennifer Lawrence) add their personalities to the struggle.

This is, as it sounds, fun.

But it wasn’t enough. Someone also thought this movie should be Harry Potter; thus, dead-on-the-screen scenes of students sharing their powers over Cokes, Oreos and “The Hippy Hippy Shake.”

By the finale, director Matthew Vaughn (Kick-Ass) is lining up his mutants like a boy playing with action figures. Vaughn’s strength—not that I admire it—is to employ cartoon violence and take it too far.

In X-Men: First Class, Vaughn could have gotten further punch from the destruction by telling us more about the characters we came to see. We don’t get the sense Xavier ever had childhood trouble because he read the wrong mind; we don’t see the two adversaries agree that people are often no good. And Xavier has no hothead tendencies, even when he’s young.

Lack of dramatic ground work leads to the uninspiring finale: a moment of caped and cowled menace made dismayingly, ineptly comic.