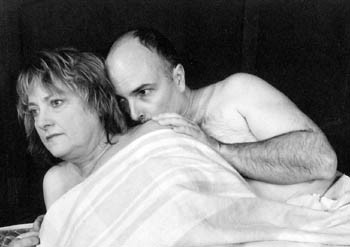 THE RAMBUNCTIOUS opening night crowd at Sonoma County Rep was so ready for a play like Frankie & Johnny in the Clair de Lune that it began laughing the moment the house went dark and squeaking bedsprings and sounds of coital bliss started coming from the stage.

Frankie & Johnny, written by Terence (Lips Together, Teeth Apart) McNally, was once the basis for a movie starring Michelle Pfeiffer and Al Pacino. The two leads in SCR’s production are Diane Bailey and Steven David Martin, who look not a thing like their glamorous film counterparts and who are, for that reason among others, especially well suited to their roles.

Frankie & Johnny is a funny, poignant dialogue between a middle-aged man and a middle-aged woman just beginning to fall in love. He is the new short-order cook at a New York diner, she the veteran waitress. They notice each other at work, go out on a date, and end up in her apartment having sex. The sex is great, but afterward–in a reversal of the old gender cliché–Frankie wants to be left alone, and Johnny isn’t ready to go.

Bailey, the director of more than 20 plays at SCR, is entirely believable as the wary, pragmatic Frankie. She has a kind of tough resignation that seems to come from living alone in New York City and from having been around the proverbial block too many times. Like any experienced waitress, she has suffered a lot of fools–but not gladly.

Martin’s Johnny is not foolish, but he is sometimes a ham in the way that men can be when they’re trying to impress women. His earthy exuberance ranges between that of Zorba the Greek and Joe E. Brown in Some Like It Hot. Zowie! He’s effusively in love with Frankie, even though they’ve just met, and he has no problem expressing himself.

Frankie, on the other hand, regards his puckish behavior as first bewildering, then more and more annoying. Her complacency is seriously ruffled, and the distance to which she is accustomed has been breached by a strange, persistent man who won’t stop praising her beauty, no matter what insults she hurls at him. “You want too much,” she says defensively. “I’m a BLT sort of person, and I think you’re looking for someone a little more pheasant under glass.”

Johnny is undaunted by her resistance, unwilling to retreat from intimacy, determined to win her over. Martin plays him with relaxed self-confidence and a kind of virility that has nothing to do with machismo. Because he pitches most of the woo, Johnny gets most of the laughs, and in less skilled hands he could seriously upstage Frankie. Not this time. Martin and Bailey generate real chemistry, balancing each other attentively on the stage.

Director and set designer Jim DePriest has given his actors a rather drab apartment to be in, aside from four small posters of the Beatles that I didn’t really believe Frankie would hang right above her bed. But the sink works, and the whole audience can smell the Western omelet that Johnny cooks on the stove, further enhancing the intimacy of the small theater.

This is a play to see with someone you love. Playwright McNally says, “The story is a celebration of people who follow the yearning and are willing to enter the joust once more.”