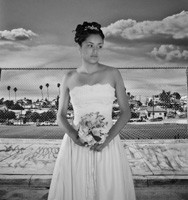 One of a film director’s duties is to harmonize the acting styles of the cast. Overlook filmmakers Richard Glatzer and Wash Westmorland’s inability to mesh veteran character actors with the tentativeness of artless nonprofessionals, and Quinceañera is highly recommended. It has a lot of appeal, and a lot of optimism. And it unveils a rite many Anglos don’t know about: the 15th birthday-cum-debutante party.

After a session of commemorative photos at the rose garden in L.A.’s Exposition Park, an all-female quinceañera court is ferried to a nightclub in a stretch Hummer limo. The honored girl’s cousin Magdalena (Emily Rios) is an outsider, the daughter of a Protestant storefront preacher. Her own quinceañera is coming up, and she’s jealous because it won’t be celebrated with such royal style. Magdalena is also distracted by her perhaps cheating boyfriend, Herman (J. R. Cruz). She’s not quite convinced by the text messages he’s sending her: “urstillinmyheart.”

The evening is disrupted by the black sheep of the family, who wasn’t invited. Carlos (Jesse Garcia) a kid with an y que attitude, a coffin-shaped stash box in his pocket, and the numerals “213” tattooed on his neck. Later, when family trouble strikes Magdalena, both she and Carlos end up moving in with their 83-year-old tio Tomas (Chalo Gonzalez). Carlos turns out to have a good reason for being an outsider: he’s drawn to men, and he sets off the gaydar of the householders living in the front of his uncle’s apartment. That’s Gary (David W. Ross) and James (Jason L. Wood), a pair of gentrifiers with industry money in their pockets.

This love letter to L.A.’s Echo Park neighborhood makes its rough-and-ready streets look as scenic as Oaxaca. The palm fronds gleam from their monsoonal baths. A few clouds are still scudding in the heavy sky, the hillsides are richly green and the park benches are scribbled with stylish-looking graffiti. You never get these picturesque L.A. locals in a movie without gangsters and guns, ever. Here, the only explosions are the Cinco de Mayo fireworks.

Glatzer and Westmorland are fine writers, skilled in creating dialogue and in knowing when to subtract it. Unlike many indie filmmakers, they’ve also honed their skill in creating visuals and camera movement. In the beginning, they engineer a relatively complex shot of a plate of food snaking its way through the party, so we can get a look at the guests.

Quinceañera is a minor revelation, and if it weren’t for the uneasiness of some of the acting, it’d be one of the best films of the year.