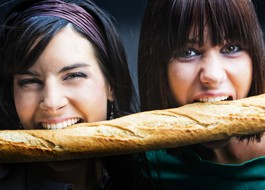 Remember the lead-up to Y2K, when the panicking masses stockpiled canned ravioli and beans in hastily constructed pantries, as if they were preparing for the Big One?

In retrospect, some might conclude these folks were a wee bit paranoid, but I look back on that time as a window into a collective sanity of sorts, and an important teaching moment. Fears of computer crashes highlighted our dependence on technology and catalyzed the panic, but what people were actually, viscerally afraid of was running out of food. Ultimately, the alarm was more rooted in our dependence on supermarkets than on computers.

With the financial markets in meltdown, many people are now worried about their money. As with fears of computers gone haywire, the economic jitters quickly circle back to even more fundamental concerns, like putting food on the table.

I was once infatuated with the idea of living self-sufficiently, like a homesteader, earning my existence from the earth with sweat and ingenuity. I eventually gave up on that idea, because while I’ve long admired and practiced many of the skills that homesteaders used to survive the winter, I don’t want that lonely lifestyle any more than most homesteaders probably did. While civilization is rife with problems, community is cool.

Now I run with a loose-knit collection of friends, acquaintances and neighbors, each with his or her own skills and specialties in the realm of food acquisition, preparation and storage. I call these people my food club.

The first rule of food club is you talk about food. A lot.

In place of the grace said before meals in many homes, food clubbers tend to give thanks by recounting the stories behind their food. For example: “We have tuna that Mike caught on his fishing trip to Washington state marinated in soy sauce and homegrown garlic, home-pickled peppers, roasted roots from Steve and Luci’s farm, garden salad, and a bottle of saffron mead from Buck’s cellar.”

The typical food club meal is composed of mostly local ingredients, but we aren’t locavore fundamentalists. What makes it food club is the network of relationships behind it.

There are 52 and a half grains of gunpowder in my bullets, says Bill, who shoots a .270 hunting rifle, like me. A grain is a unit of weight, which makes things confusing, because gunpowder isn’t powder at all, but lots of small metallic pellets, which are also called grains.

Hunters are natural food clubbers because we love telling stories about our food. And being able to take your gun into the hills and come back with dinner offers a kind of primal comfort and security. Food security is a kind of social security. Guns, unlike computers, can’t forget what time it is. Bullets, unlike money, don’t become worthless.

Bill’s bullet-loading station was a little dusty, as it hadn’t been used in 10 years. He usually fires only one shot a year, so he’s still using the batch he loaded before Y2K.

The bullets I’m loading are copper-based, rather than lead-based. I decided to switch to copper when a fellow food clubber told me about studies showing increased levels of lead in ravens’ blood during hunting season, presumably because the birds are eating bullet-riddled carcasses left behind by hunters. Other studies have found traces of lead in wild game as well, making lead bullets a human health risk as well as an environmental concern.

Not all food clubbers hunt, or even eat meat, but those who do need to know where it came from. If more people could see conditions in the slaughterhouses, smell the feed lots and comprehend the environmental, social, economic and humanitarian costs of factory farming, mystery meat would be more than most folks could swallow. That’s why omnivorous food clubbers hunt for their meat, make friends with hunters, buy their meat from local farmers or otherwise take the mystery out of it.

Food clubbers share their knowledge, helping each other make the connections and develop the skills we need to take control of our own diet. We share this information via chance meetings in coffee shops, on the trail, at the farmers market, as well is in more formal meetings like pot-luck dinners or at the Swap Meat.

The Swap Meat is kind of like the food club’s annual convention. It happens in February, when pantry and freezer stocks are dwindling and the selection that remains is turning monotonous. My food club and I gather in a cozy living room to trade our surplus, increasing the diversity of our respective stashes. We have a good time, swap stories, observations and predictions, and then go back to our lives. Some food clubbers I might not see again until hunting season, when we’re sharing a tent or the back of a pickup truck, or helping each other carry out an animal. Others I won’t see again until farmers market.

For some, a food club is partly a response to the fears revealed by the Y2K episode, but we generally aren’t doing it out of fear. We aren’t doing it to save money, either, though we often do—and in these trying economic times, every little bit helps. Often, what we do is motivated by knowledge of the harmful or healing consequences our eating choices can have on the world, but as far as I’m concerned, if it isn’t tasty, healthy and fun, it isn’t sustainable.

And sure, if the Big One ever does hit, if the stores ever run out of food of if economic collapse makes our money useless, we food clubbers will know how to feed ourselves—not as independent pioneers, but as member of a real, functional community.