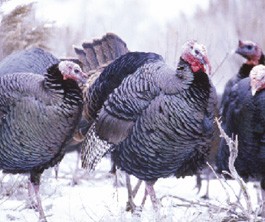 A Fourth of July bash. It seemed like a good idea at the time, a way to make my own declaration of independence while getting all my friends (and that would be exactly eight of them) together for a swell party. I mean, I’m an American like anybody else, which is really to say that I’m American like almost nobody, which makes me like most Americans when it comes right down to it. And like my fellow Americans I, too, love my freedom, and that’s what it’s all about, isn’t it? Besides, I had my own reason to celebrate.

I’d read somewhere that it was possible to barbecue an entire turkey on a Weber, and that sounded festive, if kooky, or at least memorable. Who knew how indelible said memory would be?

True, I’d seen the recipe around Thanksgiving, and that might have been the first hitch. I admit I didn’t quite remember every last step of the process, not to mention the briquette-per-hour detail or the internal-temperature-to-avoid-major-salmonella-poisoning detail. But how hard could it be? Just put a shitload of charcoal in the Weber, douse with lighter fluid, get the bird in there, clap the top down and cook the thing until it can no longer squawk.

You might wonder, why a turkey for the Fourth? Why, indeed. Each of my eight beer- or salad-toting friends asked the same question. So I trotted out Benjamin Franklin’s thoughts on our national bird, the bald eagle–how it had a bad moral character and was lazy, unable to make an honest living, lousy (with lice) and a rank coward. Old Ben thought we should choose as our emblem the turkey, which, though admittedly vain and silly, was an original American and brave enough to take on any old grenadier of the British forces. All righty, my friends said, peeking in on the browning hulk before making a beeline for the cooler.

I had a rather personal stake in this particular Fourth of July. What was to become the Great Turkey Experiment also marked the 15th anniversary of my first arrest, and who loves her freedom more than one who’s been deprived of it, even for the three hours it took my mother to come on down to the station and put up bail?

My arrest involved a run-in between a rent-a-cop in front of the Ritz-Carlton in downtown Boston and my best friend, Erica. We’d been on our way to the firework show along the Charles. Suffice it to say, we were completely in the right, completely, but as I remember, some words were exchanged. It’s a long story and gets longer every year, when on the Fourth I insist on regaling my long-suffering friends with the unabridged–that is, the fully dramatized–version.

I had gotten to the part where Erica was being dragged through the Ritz’s revolving door–no easy feat, especially with me clinging to the cop’s back the whole time–when my neighbor Jimmy stopped by, toting a box of bottle rockets and Roman candles.

“What you got there?” he asked. “A turkey,” I said, and lifted the lid to show him. Because I don’t have much of a backyard at my place along the Russian River, I’d set up the grill and a bunch of lawn chairs in the front, where, I reasoned, I could chat with neighbors as they passed by while I tended the bird.

It did seem to need a fair bit of tending. It appeared that the fire hadn’t really taken, although I’d started it hours before anybody had arrived. I had to keep throwing in briquettes and squeezing the Kingsford with a flame-flirting stream into the kettle. Jimmy took one look, and I guess the firelord in him kicked in. “Give me that,” he said, grabbing the fluid from my hand. Finally, he asked, “Why the hell would anyone roast a turkey in the middle of the summer?”

That was a new variation on the turkey question, true, but it prompted the same Franklin-informed response. I had just gotten to the bit about the eagle being a rank coward when Jimmy turned on me, wielding my own barbecue fork. It’s got a handle shaped like a baseball bat. He gripped the bat and pointed those long tines my way. “Listen you, these colors don’t run,” he barked, which I took to be a bad sign.

I assured him I was talking about the eagle, not the United States. I tried to argue that the red, white and blue of the turkey’s wattles made it essentially patriotic, but no go. “We’re no turkeys,” he shouted and I could tell by the hush that fell over all (eight) of my friends that this was playing better than my Ritz-Carlton arrest story ever had. Before long, our debate fell into a fairly well-worn groove concerning two birds of other feathers, the hawk and the dove, with my assembled friends nibbling chips and drinking beers, watching Jimmy and me go at it in ever-increasing volumes.

The two of us were looking pretty un-neighborly, I guess, until Jimmy, still waving the fork, jabbed it into the bird. “Looks like it’s done,” he announced. And it did indeed look as burnished and red as Aunt Tillie’s mahogany credenza. “This I’ve got to try,” he said, and helped me get it onto a platter. We cut off a slice, and what can I say? The whole bird was infused with eau de benzene. The centerpiece to my barbecue was completely inedible. There had been no room for anything else on the grill, of course; that 22-pound mascot had hogged it wholly.

Jimmy turned out to be a great neighbor after all, and invited me and my friends–all eight of them–over to his house for burgers and dogs. He seemed to appreciate the story of my arrest, but it might have been all the beer we’d consumed by then. He even let me light the first firework.

That’s when I shouted, “Proud to be American!” with only a fraction of my usual irony.

Best of the North Bay