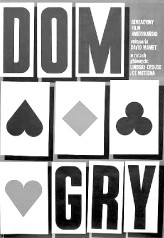 I‘ve always liked David Mamet’s 1987 debut film, House of Games, but now I feel like I never truly saw it until I saw it through Simon Lovell’s eyes.

“I’d love to shake David Mamet’s hand one of these days and say what a great movie about con games that is,” says Lovell.

And he would know. Lovell is a former confidence man himself, who now uses his powers for good instead of evil as a magician, most famously in his critically acclaimed off-Broadway show, Strange and Unusual Hobbies.

He still draws on his experiences as a scammer in the show, as well as several books on the subject, and recently I stumbled across his magnum opus, How to Cheat at Everything. The title is a bit of a joke, since most of the book is actually about how to protect yourself from cheating. It’s the most gripping thing I’ve read in quite some time, and I couldn’t stop thinking that, even as nonfiction, it could be the basis for the ultimate con-man movie; Lovell even uses the very cinematic device of following a single hustler and his friends through every con in the book.

He also makes references to movies as illustrative examples of cons in action–if he feels the screenwriters have done their homework. He mentions House of Games and The Sting more than once, which inspired me to go back and watch those movies in an entirely different context.

I was lucky enough to talk to the Manchester, England-born Lovell about these cinematic cheats from his home in New York City, and it turns out he’s quite the film buff. But con flicks that impress him as true to their subject matter are rare.

“There are very few,” he admits. “You’ve got The Hustler, The Grifters; you’ve got The Sting, House of Games, The Color of Money. These are movies that are few and far between, where cons are actually done properly, even within a cinematic sense. Another lovely movie is The Baltimore Bullet with James Coburn, about a pool player. The Sheep Has Five Legs is a very interesting one. It’s very hard to find, but if you can find it, it’s fascinating.”

Of those, the interesting thing about The Sting and House of Games is that they both depict the same con: the “crossed deck” or “cross.” It works on the time-tested principle that a little knowledge is a dangerous thing, hooking the victim into thinking that he or she is actually being brought in on a con, while in reality an even bigger con is being worked on them. In both films, Lovell says, the cons play out with a lot more elegance than your run-of-the-mill scam.

“Most cons just rely on human greed and culpability,” says Lovell. “The high end of cons are the artistic cons. The Sting would be a very good example of an artistic con. And House of Games is a nice artistic con. They’ve got everything planned out, they know what they’re doing right from the start, and it’s really a delightful piece.”

But that alone can lead to some problems with realism, as Lovell points out about The Sting. “Of course, it’s theatrically exaggerated, because the money at the end of it is probably nowhere near what they needed to put in to pull all of that shit off,” he says with a laugh. “So you walk away with $100,000, and what did you put into it, $500,000? Bit of a disaster there, you know?”

There is some poetic license in House of Games, too, like the “tell” that finally gives the cons away–the unwisely parked red car. Lovell estimates the hospital stay for a con who screwed up his part that badly would be minimum 14 weeks, which is why cons in real life rarely make such mistakes.

If you don’t understand the enduring appeal of the con movie, take it from the man who teaches casino operatives about cheating: everyone has the capacity to be a hustler. And a mark.

“People don’t think they’re gullible,” says Lovell, “but you look up the word ‘gullible’ in the dictionary, and you’ll find the entire human population in a photograph there.”