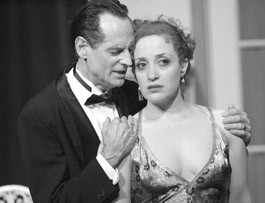 As a play about grief and post-tragedy family dynamics, David Lindsay-Abaire’s Rabbit Hole is just about perfect. Setting aside the penchant for absurd situations and bizarre, eccentric characters that he exhibited in such works as Fuddy Meers, Kimberly Akimbo and Wonder of the World, the playwright here displays a thrilling and gorgeously grounded voice, winning the Pulitzer and a trunk full of Tony awards for this 2006 work in the process.

With co-directors Sharon Winegar and Scott Phillips’ finely paced new production at the Sonoma County Repertory Theater, Lindsay-Abaire’s wise and moving masterpiece finally comes to the North Bay. Featuring a strong cast adept at underplaying their interactions and line deliveries while revealing the powerful emotions that bubble below the surface, this is a magnificent show, another notable achievement for the Rep in a very strong year.

Eight months after the accidental death of Danny, their four-year-old son, Becca and Howie (the excellent Jennifer King and Peter Downey) are each dealing with their grief in different ways. Becca prefers not to talk about the tragedy, while Howie will tell anyone who asks about the day his son chased his dog into the street in front of a car. He clings to physical reminders of his son, routinely watching home videos of Danny at play.

Meanwhile, Becca is packing away all of Danny’s old drawings, books, clothes and toys. She wants to sell the house; Howie wants to keep it. Becca has given Danny’s dog away; Howie wants it back. He seeks the comfort of sex; she finds the notion tasteless and selfish. Both are clearly in a state of shock, but only Becca actually allows herself to look the part, moving about her daily routine as if half asleep. She is the flip opposite of Howie, whose anger and grief are stuffed so deep down that they only appear in flash eruptions which he is quick to suppress.

Becca’s situation is complicated when her party-girl sister, Izzy (Melissa Thompson Esaia, absolutely magnificent in her first Rep appearance), casually announces that she is pregnant. Becca knows she should be happy for her sister, but somehow can’t make it happen. Becca’s off-kilter mother, Nat (Peggy Van Patten), tries to offer comfort, but her attempts to compare her daughter’s suffering to her own—she lost a son to suicide—are only resented. The constant appearances of Jason (Jason Robertson), the young man whose car struck Danny, at first seem to be another roadblock, but eventually offer Becca her first real opportunity to work out a kind of healing for herself.

The direction is first-rate, grounding the events in a wholly believable everydayness, and the cast, eschewing the kind of visible overacting that often mars these kinds of dramas, is entirely wonderful, the very definition of a great ensemble. The power of the play is Lindsay-Abaire’s recognition that these people are not unusual, and nothing they are going through is unusual. When hope comes, it comes in little ways, as when Nat explains that grief never goes away but eventually grows small enough to carry around. Rabbit Hole is a beautiful play, one of the best American plays of the last 10 years, and with this solid, sensitive production, the Rep shows us exactly how great it is.

Noël Coward’s Private Lives was reportedly written by the famous English playwright in three days—and went on to run on Broadway for almost a year. That was 1931. It has since been revived on Broadway seven times and is beloved as an example of Coward working at the top of his game. Today, nearly 80 years later, Coward’s game appears to be a much nastier one than it might have seemed upon delivery, with all those evil but hilarious witticisms piling up.

Whatever embedded misogyny still exists in the play is mostly leapfrogged in a delightful new production at Cinnabar Theater. The play is smartly directed by Carol Mayo Jenkins with a cast that tackles not only the British accents one expects from a drawing-room comedy, but also aims, and largely succeeds, at finding the human beings beneath the strutting, griping, cheating, lying, fighting, joking and wry quipping of two couples who pretty much fall apart on their simultaneous wedding nights.

Elyot (John Craven, looking dashing and dapper) is a slightly older divorced man of wealth who’s just married the much younger Sybil (Rebecca Castelli). Sybil is thrilled to be taken to France for her honeymoon but won’t stop pestering Elyot for details about his first marriage to a woman named Amanda. In short order, it is revealed that Amanda (played with vivacious decadence by Tara Blau) has come to the same French hotel on her own honeymoon with her uptight, prim and proper new husband, Victor (Dodds Delzell). Of course they are given adjoining rooms.

When Elyot encounters Amanda lounging on the next-door patio, he immediately realizes, as he tells Sybil, that something terrible will happen if they don’t leave immediately. Sybil refuses, adopting a hilarious pout that won’t go away. Despite their initial attempts to fight it off, Elyot and Amanda are back in each other’s arms in short order, trying to figure out how to dump their new spouses and run away together.

The chief delight of the play, of course, is the language. No one was better at packing a script with clever, borderline evil lines than Coward. The nastiness even extends to the charming stuff, as when Elyot sweet-talks Amanda with the words, “Death’s very laughable, such a cunning little mystery.

Come and kiss me darling, before your body rots and worms pop in and out of your eye sockets.” Such lines must be performed with a perfect balance of farce and realism, and in this Private Lives, the cast works wonders, making us love them, hate them and ever so slightly want to be them, until the last indelible, delectable insult.