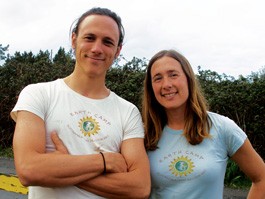 Earth Camp Collective, the Sebastopol summer camp program that connects kids with nature and encourages playing in the dirt, has an ambitious plan for 2010. They want to raise $10,000 to pay for 50 local kids to attend the camp at Laguna Farm this summer. To make it happen, the group is planning several fundraising events, including a concert at the farm on May 22 with music by trans darlings Coyote Grace, and of course plenty of organic eats. But the most novel among the fundraising schemes is the community-recycling program.

Here’s how it goes: The Earth Camp Collective has set up a CRV recycling center near Laguna Farm’s CSA barn. People coming out to the farm to pick up produce or commune with the “cosmic” chickens can donate their CRV-refundable bottles and cans with refunds attached, and Earth Camp will recycle the containers. The money from the containers will be used for scholarships. Easy, right?

All this fundraising comes at a pivotal time for Earth Camp. Regardless of the rotten economy, the program is growing, and this summer will include a one-week session for teens. The curriculum will still be built around regular Earth Camp themes of sustainability, interconnectedness and empowerment, but the curriculum will be more mature. Earth Camp cofounder Vanessa Eyen says that the camp is really all about creating change.

“The reason we started this summer camp,” Eyen says, “is to provide experiences for children that teach them the skills they’ll need for a sustainable future.” And who doesn’t want a better future? At Laguna Farm, 1725 Cooper Road, Sebastopol. 707.824.1600.—K.M.

Best Place to Find your Teenager After School

The 3 o’clock bell has rung. Where are your kids? Parents wait for the check-in, those texts or phone calls that let them know where to find their offspring. Try Main Street in Sebastopol, at the small white Victorian that is home to the Ceres Community Project. In the well-organized kitchen, a half-dozen teens from schools throughout Sonoma County annually create and package thousands of healthy, gourmet meals for people with cancer and other life-threatening illnesses. Under the tutelage of professional chefs and nutritionists, volunteers learn basic cooking skills, nutritional information and how to work together as a team. From recipe to cleanup, students discover what making a healthy meal entails. But even more importantly, they learn the value of giving to individuals, the community and ultimately, themselves. The hands-on experience also counts as credits toward community service, a necessary part of college applications, and as a reference for job applications. And hopefully, they’ll bring those cooking skills home, and give mom or dad a break in the kitchen. 330 S. Main St., Sebastopol. Contact volunteer coordinator Margaret Howe, 707.829.5833, ext. 2.—S.D.

Best Comeback for Fish and Families

Most tourists driving on Bohemian Highway travel through Camp Meeker and see an overhead sign, a makeshift post office in a temporary trailer and . . . well, that’s about it. But those curious enough to get out of their cars in the last 12 years would have seen a relic from Camp Meeker’s vacation-home past: a run-down swimming hole, complete with a huge unused concrete dam and a rusty vertical ladder descending into a sandy creek bed.

Last year, work began on the Dutch Bill Creek Watershed Fish Barrier Elimination Program, as it’s officially known, to the benefit of area residents and coho salmon and steelhead trout alike. So far, the first phase brought removal of the old concrete conduit and dam, installation of burlap erosion control, planting 25 new saplings, installing a new bridge, importing large creek bed boulders, installing fish ladders downstream and regrading the entire area, allowing more than three more miles of riverine area for the fish. Phase two is set to include a restoration of the playground, a new picnic area with fresh tables and barbecue pits, and other structures to signal the possible resurrection of Camp Meeker as a community activity center.

“Downtown Camp Meeker was originally quite larger than Occidental,” says Seth Minor, a 32-year resident and vice president of Parks and Recreation. “When Camp Meeker was a summer community, there was an outdoor theater and dance hall, you could have a barbecue, there’d be dances at night. We’re looking to bring that back.”

Minor grew up when Camp Meeker was still about 10 percent year-round and 90 percent vacation residents instead of the other way around—the town still had a schoolhouse, a general store, a library and a dance hall, and one by one he saw all those buildings crumble. It’s his hope that the phase two restoration can rebuild the structures in which to have plays, music and gatherings. As impeding as the old swimming hole was to fish, “It was our only identity,” Minor says. His department hopes to create a new one.

Of course, this is a town that has a hard time with change, evident in the recent tussle over a proposed cell-phone tower that would provide actual coverage to the area. But just about everyone can get behind what’s happening to the old creek, and the way it’s being brought back to life. “We’re very much into the history of Camp Meeker here,” Minor says. “Our general plan is we’re going to try to get something that ties that whole area together, like it used to be, back in the day.”—G.M.

Best Place to Drop ‘Em Off While You Get It On

Parents of teens often find that witnessing a kid’s transition from childhood into the world of cell phones, makeup, Facebook and giggly sex-talk whispers during afternoon carpool can be unnerving and even a little scary. Dating while your teenager is having the same “do you think he likes me?” phone conversation in the next room is even more challenging. Many single parents of teens may find that just when they are thinking of jumping the bones of the great date sitting across the table, their thoughts instantly go to images of their trusted, yet horny, teen thinking the same thoughts while at home, unsupervised. Never fear, the DeMeo Teen Club CHOPS is here! With annual membership dues at the miniscule fee of $1 per teen, CHOPS is the perfect, guilt-free and safe place to leave the kids when heading out on the town. In addition to the well-supervised and fun Third Friday Middle School Dance, CHOPs offers art classes, barista trainings and has its own recording studio and computer lab onsite. All classes are free or low cost with membership and include access to their dirt-cheap snack bar. 509 Adams St., Santa Rosa. 707.284.2467.—D.B.

Skate parks like the ones in Petaluma and Santa Rosa are lost causes when it comes to graffiti—there’s simply been no oversight or abatement efforts since they opened in the ’90s. Healdsburg’s skate park had the good idea of implementing a rule that if any graffiti is found on the park’s concrete, the place would close for a week. But the Sebastopol Skate Park, with the same rule, has a much more logical approach. By freeing up an entire designated wall for skaters and artists to practice legal graffiti, murals, tags and other spray-paint street art, they’ve only had to close the skate park once or twice due to vandalism. Healdsburg, meanwhile, seems to always be closing. The moral is obvious: give the kids an alternative. Cordon off a legal graffiti area. Don’t make them feel like criminals, and they won’t act like criminals. Thanks, Sebastopol! Laguna Park Way, Sebastopol. 707.823.0321.—G.M.

Like peanut butter and jelly, kids and trains just seem to go together. Trains even tend to bring out the inner child in the adult, as with Traintown founder Stanley Frank, an Oakland printer who purchased the Sonoma plot in the 1950s when his dedication to his model train layout exceeded his basement space. He spent 11 years landscaping and modeling the 10-acre park, and his detailed, fine-scale diesel and steam trains have been whisking visitors along a mile and a half of tracks, through an obsessively curated world of miniatures, ever since. The locomotives chug though the Traintown woods, which are populated with a cast of miniatures, including fishermen, camping families and deer. Visitors pass through tunnels, traverse trestle bridges and make a stop in the town of Lakeview, where buildings are carefully scaled at a ratio of three inches to the foot, and the petting zoo is populated with pygmy goats. Though the 20-minute train tour remains the park’s star attraction, Traintown has grown to a veritable theme park since its opening over 50 years ago, and features four full-size vintage cabooses, a Ferris wheel, a carousel that plays train songs, and other rides. Traintown is open daily in the summer and weekends in the winter, weather permitting. 20264 Broadway, Sonoma. $4.75. 707.938.3912.—R.M.

Best Place to Leave the Kids While Winetasting

Probably the best thing that’s happened for the kids of Napa Valley in decades is the St. Helena Skate Park. Boasting an enormous coverage area, a massive vert bowl with a cradle extension, a smaller cloverleaf pool, a quarterpipe and tons of rails, stairsets and banks, the park is the perfect spot to drop off the kids for the day while you hit the tasting rooms of Napa’s famous wineries. Even those who don’t skate will find something to do in Crane Park, where the skate park sits right between the home-run fence of the baseball field and a full playground with picnic tables. The large skate park is heaven for young shredders who’ve had to suffer with the only other alternative in Napa Valley—the small, out-of-date Napa skate park, situated next to the city’s sanitation plant—and those in Sonoma and Marin have been making the long drive to see what the fuss is all about. After all, it’s the only skate park in the region not designed by Santa Cruz-based Wormhoudt, offering an everything-is-skatable approach from Seattle-based Grindline. At any given point in the park, there’s a hip or a jump, and chances are that after eight hours of tasting rooms, your kids will still be discovering new pockets of concrete to ride. Crane and Grayson avenues, St. Helena. 707.963.5706.—G.M.