'Taking Woodstock' more than just nostalgia for the mud 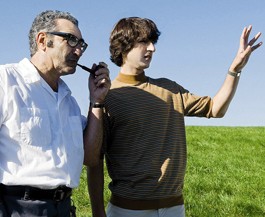 Maybe you have to be really Apollonian to make a truly Dionysian film. Taking Woodstock is way more than what the French call “nostalgia for the mud.” Ang Lee and screenwriter James Schamus bring their customary historical density to this view of the three-day-long music festival in upstate New York, August 1969. There are no significant anachronisms to throw you back into 2009, none of the sense of modern-day actors swishing their wigs around to an array of moldy oldies.

This film won’t mollify hippie-haters, even though it acknowledges the portable toilets, the drenched fields and the chocolate-colored slop on the ground. But Taking Woodstock‘s makers are also aware of the tensions and pretensions of these ’60s types (the film notes that the road out of Woodstock led to Altamont). Jonathan Groff as the organizer Michael Lang, a helicopter-borne hippie capitalist, has the sinister confidence of a general. Taking Woodstock‘s slightly military title makes this peace movie the twin of a war movie; it concerns the same conflict, the same transitory gains, and the same trampled, unsettled ground.

Based on Elliot Tiber’s memoir, this is the story of Elliot Teichberg (Demetri Martin) trying his best to keep the family’s decaying and over-mortgaged Catskills motel open in the summer of 1969. It’s several clapboard cabins engulfed by the poison sumac, with a swimming pool personally Cloroxed by Elliot’s father, Jake (Henry Goodman), a roofer by trade. “Excuse our appearance while we remodel” signs try to make up for the fact that the towels here require a dollar deposit.

Ornery mother Sonia (the uproarious Imelda Staunton) greets guests with the warm welcome you’d expect at a skid-row flophouse. This area was once the refuge for New York Jews escaping the tropical summer heat, and there’s plenty of ambient anti-Semitism among the locals, just waiting for a little conflict to dig it out.

Elliot is going nuts trying to keep the place going with an arts festival; he has a troop of Living Theatre types called the Earth Light Players rehearsing in the barn. He’s the youngest head of the chamber of commerce in the history of Bethel, N.Y., in desperation after hearing a nearby community is going to cancel a huge rock concert because of fear of rampaging hippies. Elliot has the inspiration to contact the local dairy farmer Max Yasgur to see about renting his pastures for the concert.

Lee keeps the big event mostly offscreen, though he considers it from different angles: the lilt of electric music over the trees and ponds, a benign apocalypse of closed roads, with a long tracking shot of the abandoned cars and the young people roaming off to a destination we don’t really visit. The festival’s chaos helps Elliot get free of his mad mother, takes the cork out of his bottled-up sexuality and finally gives him rebirth in the womb of a VW van with a tab of blotter acid and two friendly West Coasters (Paul Dano and Kelli Garner).

In this sequence, augmented by computer-animation, Elliot gets as close to the concert as he’s going to get. It’s a vision of a far-off electrified stage glittering and surrounding with a shimmering nebula of humanity (the LSD is still doing its work).

Demetri Martin is excellent in the lead role. He resembles Dustin Hoffman, but he may be a more inclusive and tart actor; the recessive comic reactions to the pressures on all sides of him keep the film funny throughout. The supporting acting builds Lee’s vision of harmonizing eccentricities. Emile Hirsch is maybe the exception; playing a traumatized young Nam vet, he sticks out like a sore trope. But Leiv Schreiber’s Marine-sergeant-turned-drag-queen Vilma is a pure delight; it’s a performance on the far side of camp, with only a slight italicization in the words to mark his own unusualness.

The great Eugene Levy plays old Yasgur as a man as ruminative as his cows; as always, Levy revels in the beauty of being a square.

It’s not easy to make a good movie about this event; the younger the viewers, the more sick they are of hearing about it. Taking Woodstock‘s serene appreciation for a past time makes this one of the best fictional movies about the 1960s. It’s the history lover in Schamus and Lee that appreciates Woodstock’s uniqueness, and its ultimately transitory nature.

Previous ArticleLive Review: Elvis Costello and the Sugarcanes at the Wells Fargo Center