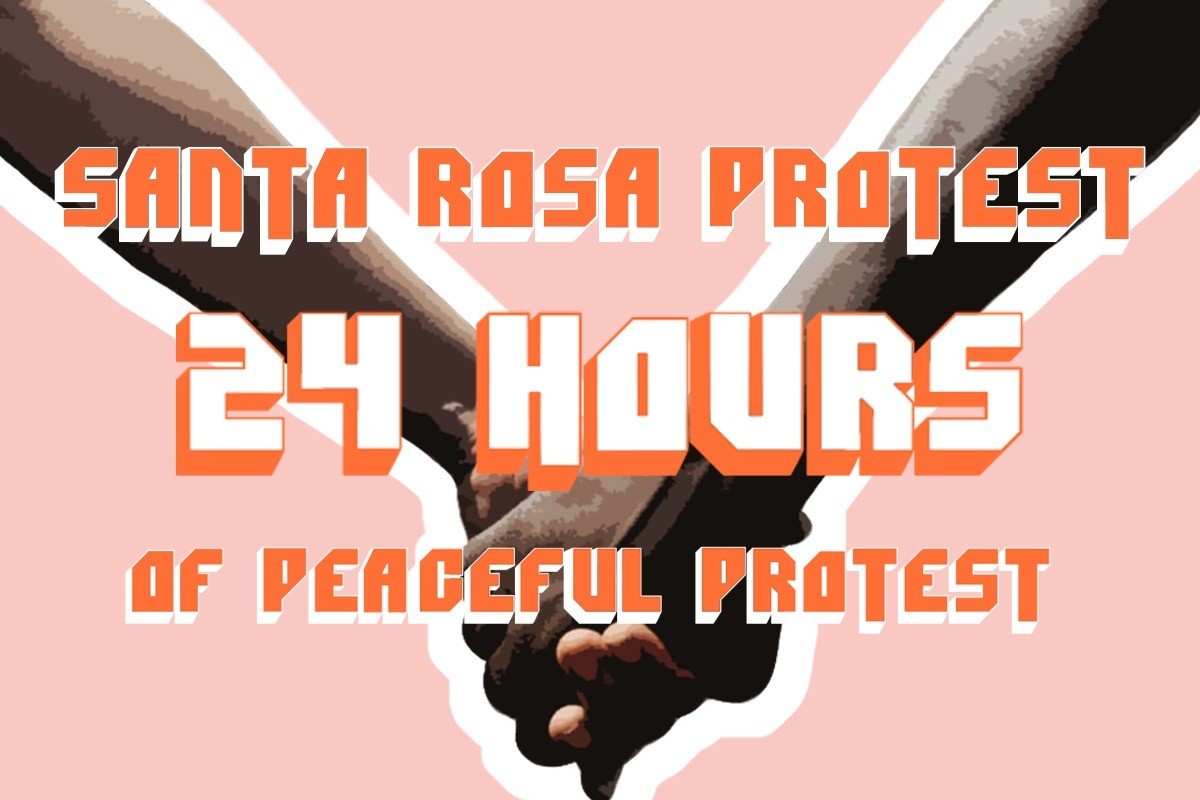 Slowly, but surely, the North Bay is re-opening. After more than two months in self-isolation due to Covid-19, residents in Sonoma and Napa County are starting to return to shops, restaurants and other social venues.

In addition to relaxing shelter-in-place orders, the Black Lives Matter movement and protests against police brutality continue to take to the streets in spots like downtown Santa Rosa, meaning that Father’s Day weekend 2020 is shaping up to be a busy few days in the North Bay.

Of all the events taking place between June 20 and 21, the most ambitious endeavor is the planned 24-Hour Protest in Santa Rosa. Organized by a group of young activists, the planned protest aims to make a stand against police brutality and to champion peace and justice. On the event’s Facebook page, organizers write, “We want to shed light on police brutality in our community and are trying to create a platform where all people of color can come and express the change they feel is important. We want to provide a safe environment for everyone to come together and HEAR each other on the issues they feel are important to make a change. “

With that goal, the protest will begin on Saturday, June 20, at 1pm in Doyle Park near downtown Santa Rosa where organizers will be handing out calling cards with demands for local, county and state government representatives for protesters to call. The event then marches to Juilliard Park, where group activities, educational talk and an open mic stage will cover topics such as knowing your rights and how to effect change the community.

A silent candle-lit march in remembrance of lives lost to police violence then moves the protest to the Old Courthouse Square, where protesters will camp out overnight until a Father’s Day brunch on Sunday morning caps off the event. The protest organizers ask participants to adhere to Covid-19 precautions such as wearing a face covering and keeping socially distant when possible.

“The purpose of this protest is to give a voice to the people who need it most. This is absolutely a protest 10000% in support of the Black Lives Matter movement and want to give the opportunity to them and others alike to express the change they feel needs to happen within our community,” write protest organizers on Facebook.

In the art world, many North Bay galleries and arts groups are re-opening to the public after months of closures. One such group is the Arts Guild of Sonoma, which announced the reopening of its gallery this week, just in time to participate in the National Arts Drive on June 20.

The national grassroots fundraiser is a multi-city community experience taking place across the US. During the “Drive,” artists will showcase their work in ways that can be seen in-person from a safe distance.

“While online showcases of creativity are abundant, nothing compares to an arts viewing experience in person,” says Heidi Luerra, founder and CEO of organizing group RAW Artists. “While arts events have gone dark, this is our creative response to ensure artists are still seen, heard and supported.”

The National Arts Drive was originally set to take place in Atlanta, Austin, Chicago, Cleveland, Denver, Los Angeles, New York (Brooklyn), San Francisco, Seattle and Washington D.C., but has quickly spread to multiple cities, and the Arts Guild of Sonoma is participating from 1pm to 4pm on Saturday. “We are taking every precaution to make sure all remain safe and will adjust as need be with changing circumstances,” writes the arts guild in a statement.

Not every venue is ready to re-open, namely small music and events venues like West Sonoma County’s beloved Occidental Center for the Arts. Last month, the center first took to the web to combat social distancing and share an abundance of music and fun with the Arts In Our Hearts Virtual Variety Show, featuring a cavalcade of performers. The free streaming show was such a hit that the arts center is doing it again on June 20 at 8pm, with another stellar line-up of popular Bay Area and North Bay artists including T Sisters, Jon Gonzales, Dirty Cello, Mimi Pirard, Nina Gerber, Emily Lois and a dozen others performing. The virtual variety show will stream on YouTube, and the center has also created some fun playlists featuring many great performers who’ve been at OCA.

Other music events happening online for those still social distancing include Petaluma’s Drive-In Concert at East Washington Place shopping center. The concert on June 20 is already sold-out for in-person (or, in-car) attendees, though the event will live stream on Facebook, with headliners Majestic: San Francisco’s Ultimate Tribute to Journey.

Also on June 20, Clif Family Winery in Napa Valley hosts a virtual Summer Solstice Concert with music from up and coming artists introduced by CLIF GreenNotes, a community of musicians and nonprofits committed to environmental justice. The virtual event will also be sharing cooking tips from Chef John, and special guest appearances from Clif Family winemaker Laura Barrett and winery owners Gary Erickson and Kit Crawford. To RSVP and receive an exclusive link to the virtual show, purchase a Summer Solstice Kit on Clif Family Winery’s website.