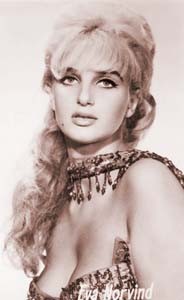 Blonde bombshell: Eva Norvind began her career in Mexican cinema, but her unconventional life has taken a few strange turns since then, as a new biopic reveals.

WHEN SHE WAS still a teenager, Norwegian-born Eva Norvind took a bus from New York to Mexico with a mere 10 bucks in her pocket. Within months she was transformed into Mexico’s version of Marilyn Monroe–a flamboyant and buxom blonde starlet who appeared in numerous ’60s-era films, including Juan Pistola, Blood Pact, and Este Nocho No.

But Norvind didn’t stop there. She turned tricks, she introduced birth control to Mexico’s Catholic women, she smuggled electronics, she had a daughter out of wedlock, she worked with Mother Teresa, and she became one of America’s leading dominatrixes.

However, the cultural chameleon’s true starring role comes in the new First Run Features art-house biography Didn’t Do It for Love, recently released to video, which chronicles the now gray-haired 54-year-old grandmother’s sexual compulsions as well as her eclectic sources of fame.

While it’s clear that the filmmaker views Norvind with some degree of admiration, Treut never lets her subject’s rather intimidating personality off the hook. Viewers may experience a basic sentimentalism as Norvind talks with some family members, but they’ll feel squeamish at other personal interactions Norvind has in the film.

In one scene, for instance, Norvind berates her younger black male lover so harshly that the man is left tongue-tied and stammering. In another, she lasciviously caresses a limbless male harmonica player. In yet another, she recounts a lesbian S&M scene that went awry. The scenes are not played full tilt with too much emotion; they’re actually recounted very matter of factly.

While the frantic pace of Didn’t Do It for Love may make the film seem like an assemblage of talking heads, it’s the fact that Norvind has lived so many different lives that makes the film seem disjointed.

She was born Eva Johanne Chegodayeva Sakonskaya, the daughter of an émigré Russian prince (who now spends his days collecting bottles) and a Scandinavian sculptress (who blithely paraded her 15-year-old daughter nude past French filmmakers). Norvind, who currently runs a dominatrix dungeon in midtown New York, has reinvented herself at least five times and is heading for the next career change. She speaks 11 languages. She sat next to Hillary Clinton at the Beijing Women’s Conference. She had an entourage in the ’80s that included Nancy Friday, Erica Jong, and Milos Foreman. She is estranged from her own daughter, who ran away at 12 and now calls mom a “whore.”

The film (whose video-to-tape transfer actually improves on the small screen) may be provocative to some; a whiff of fresh air to others. Treut passes up pop psychology and lets Norvind speak for herself without analysis. It’s clear Norvind has her demons to deal with. Her anger with her own mother is hardly concealed, and it doesn’t take Sigmund Freud to surmise that the root of Norvind’s hypersexuality may lie somewhere close to the surface of that maternal relationship.

Like any good documentarian, Treut turns the camera on Norvind’s family and on the actress-cum-dominatrix’s inner monologues (which, for Norvind, appear to never end). Norvind is frank and free of guilt, and Treut’s view of her makes for a fascinating addition to the oeuvre of a transgressive female filmmaker who defies easy categorization.

Treut sets out to explore the banality of perversion in all her films, and Norvind makes for a good pop-culture subject. So what if she dreams of urinating next to Madonna? When the aging Norvind turns to the camera and asks, “What the heck am I doing?,” one thing, at least, is clear. The answer to that question is a very interesting one indeed.