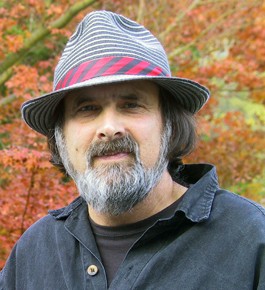 Guerneville poet and editor Michael Rothenberg is such a passionate advocate for what he believes that it can seem like he’s arguing with you even when you’re in total agreement with his positions. Born and raised in Miami Beach, Rothenberg suggests that growing up among Cubans and transplanted New York Jews had something to do with shaping his personality. In 2006, he moved to Guerneville with his partner, poet Terri Carrion.Rothenberg knew as a teenager that he wanted to be a writer. Inspired by poets Ed Dorn and Allen Ginsberg, as well as the poets collected in Donald Allen’s landmark 1959 anthology, New American Poetry, Rothenberg earned his BA in English from UNC at Chapel Hill, after which he spent time in Europe. When he returned in 1975, he moved west and, with his brother and wife, Nancy, opened Shelldance Nursery, a renowned tropical plant nursery in Pacifica.

Rothenberg soon developed a reputation for being an environmental troublemaker. His activism as part of the grassroots group Pacificans for Mori Point helped stop the development of a conference center on the Point. The spot is now under the protection of the Golden Gate National Recreation Area.

During his years at Shelldance, Rothenberg became friends with many important Bay Area poets. He’s worked closely with Michael McClure, Joanne Kyger, David Meltzer and the late Philip Whalen. Rothenberg says he met these writers not in San Francisco’s literary hothouse, but in his greenhouses by the sea among the bromeliads and orchids.

In the late ’90s, as his marriage was breaking up, Rothenberg left the business and lived a peripatetic life for a few years, traveling through the south, writing songs in Nashville and finally settling again in Miami Beach. It was during this time that he developed Big Bridge, a limited-edition fine press and web magazine. Rothenberg continues to publish finely designed poetry volumes, but his major focus is the online magazine, BigBridge.org. More than a decade after its premiere, it thrives as a rich and eclectic literary bouillabaisse.

Rothenberg acknowledges his wide curiosity and his instinct for following his own taste. “My father was a glutton,” he says. “He raised me on escargot and cheesecake, Cadillac leather and the silver scales of a tarpon doing a sun dance against a tangle of mangroves on a high falling tide. I am complex—eclectic not just to be different, but because my appetite is insatiable.”

Rothenberg counters the eclecticism of his magazine with the focused collections he’s edited of distinguished older poets, including volumes of Ed Dorn, Joanne Kyger, David Meltzer and the recent Collected Poems of Philip Whalen, which has been widely hailed.

Last year with David Meltzer and through Big Bridge, Rothenberg won a $40,000 grant from the Creative Work Fund of the Walter and Elise Haas Foundation. Their project, Rothenberg says in his proposal, “will create RockPile, a poetic journal in the tradition of Japanese literature, and a performance based on the collaborators’ travel to eight cities in the United States that were central to the cultural upheaval . . . in the mid-1960s and 1970s.”

Next month, Rothenberg will publish a new volume of his poetry, his seventh, titled, Choose: Selected Poems: 1998–2008.

Here’s the title poem:ChooseI have a clue
Monkeys like to be left alone
They don’t smoke cigars or play poker
Prefer not to dress up like The Three Bears
But a man’s got to do what a man’s got to do
Sunflower seeds, bananas, peanuts
Making industry out of ecology
10,000 years of giving up
Now we’re supposed to compromise
So we take what’s left and split it
Take what’s left and split
Until everything is in ownership
And no one can live
Because there are too many fences
Up to the moon and across the cosmos

Michael Rothenberg has a way of creating a cultural climate wherever he goes. He will be reading with Michael McClure and David Meltzer on March 28 at the Petaluma Arts Center, 230 Lakeville St., Petaluma. 707.762.5600.