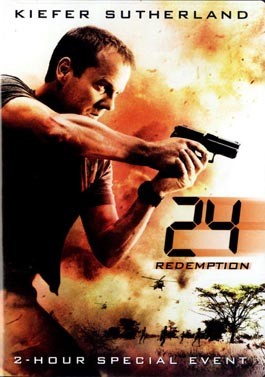 I’ll admit it, I once played Kim Bauer Drinking Games (Kim is threatened again?! Down the hatch), but after a while the repetitive plots (how many rogue nukes can there be?) and endless commercials put me off 24. The new 83-minute stand-alone episode, 24: Redemption, reminds me why. Designed to bridge Season 6 and Season 7 (which starts in mid-January), it aired in late November and is now available on DVD for people who were too busy preparing for Turkey Day to catch this turkey. On the run from his own government, Jack is holed up in a remote African village where a fellow ex-agent (Robert Carlyle) runs a school for the underprivileged. African children trail about, playing soccer, rifling through Jack’s things and getting pressed into a rebel army led by a dastardly clutch of extreme stereotypes (including Tony Todd of the Candymanseries, who deserves better). Back in the United States, President-elect Cherry Jones prepares to move into the Oval Office, which leaves outgoing President Powers Boothe in a frosty snit; Jon Voight sneaks around masterminding some kind of international perfidy. When the soldiers come trolling for child recruits, Jack swings into action, snapping necks with his feet while tied to a torture cage. Alas, he has no time to torture anybody for information, a technique that made this fictional character a real-life hero to some deluded right-wing bloviators. Eventually, lives are saved, villains are dispatched and Jack is ready to face the music back in the U.S. of A. This set includes additional footage, commentary and a documentary about the horrors of child soldiers in Africa. Best of all, Season 6 is condensed into all of four minutes, which is just about right; Season 7 is previewed in 17 minutes: Jack faces a congressional hearing, Janeane Garofalo plays the new Chloe and Tony Almeida returns as a terrorist. Plus ça change, plus c’est la même chose. (Michael S. Gant)

British TV keeps producing quality detective dramas even as American TV clings to the C.S.I. franchise and abandons the 10pm time slot to Jay Leno. The BBC production George Gently, based on the novels of Alan Hunter, aired its pilot in 2007 and followed up with two self-contained episodes of about 90 minutes in 2008—they are now available as a set from Acorn Media (the show is set to continue next year). Veteran TV actor Martin Shaw (Judge John Deed, The Professionals) plays the title sleuth, whose tales unfold in the mid-1960s. He is a battered man, trying, and not succeeding all that well, to survive the hit-and-run death of his wife. Like a lot of detectives approaching retirement, he also clashes regularly with his officious superiors. On the verge of retirement, Gently heads instead to Northumbria looking for an old nemesis and finds himself caught up in some strange and vicious murders among a bunch of Teddy Boy motorcyclists. Cracking that case, he stays for two more: one involving an IRA bombing and the other a grudge that has been festering since the war. Shaw brings a lot of stolid dignity to the role, which he needs to counterbalance the overeager ministrations of his new assistant, young Detective Sergeant John Bacchus (an amusingly Uriah Heepish performance by Lee Ingleby). Full of himself, not above cutting corners and even a touch corrupt, Bacchus proves a trial to the no-nonsense Gently. The mysteries are well plotted without too many loose ends, and the period setting makes for some nice accents (like a vintage MG sports car that Bacchus drives) without being unobtrusive. The extras include text interviews with the lead actors and writer/producer Peter Flannery. (Michael S. Gant)

In the near future, a virus gets loose in Manhattan. Most of the world dies; a few survivors turn into light-shunning blood hunters who look very much like steroidal versions of The Weekly World News‘ mascot Bat Boy. In his townhouse fortress, a military officer, Robert Neville (Will Smith), keeps watch and works on a cure. As an actor, Smith has always given the impression that being the last man on Earth would be OK by him. In I Am Legend, it takes a really sensitive and liquid-eyed German shepherd to wake him up, but … let’s put it this way: those too sensitive for Marley and Me are going to want to avoid I Am Legend as well. The most affecting moments are the scenes of a deserted Manhattan in 2012. The city is reverting to forest, with deer bounding over the cracked windshields of abandoned cars. Eventually, however, it’s all another video game, which heads into calculated, scornfully directed religious whackadooism, including sacred blood, a call to faith and a Monty Python–style holy hand grenade. Just in time for Christmas, Warners has issued a boxed collectors edition that contains everything but polyester dog fur: a book full storyboard images; the Internet-popular alternative ending; a digital copy for downloading; background docs; some rather static cartoons; trading cards; and something called a “lenticular,” which is a high-tech paperweight with moving images, not unlike those old devotional flicker cards that showed two different images of the Virgin Mary depending on the angle you viewed them at. (Richard von Busack)