Cruising, eating and dreaming in the city by the river 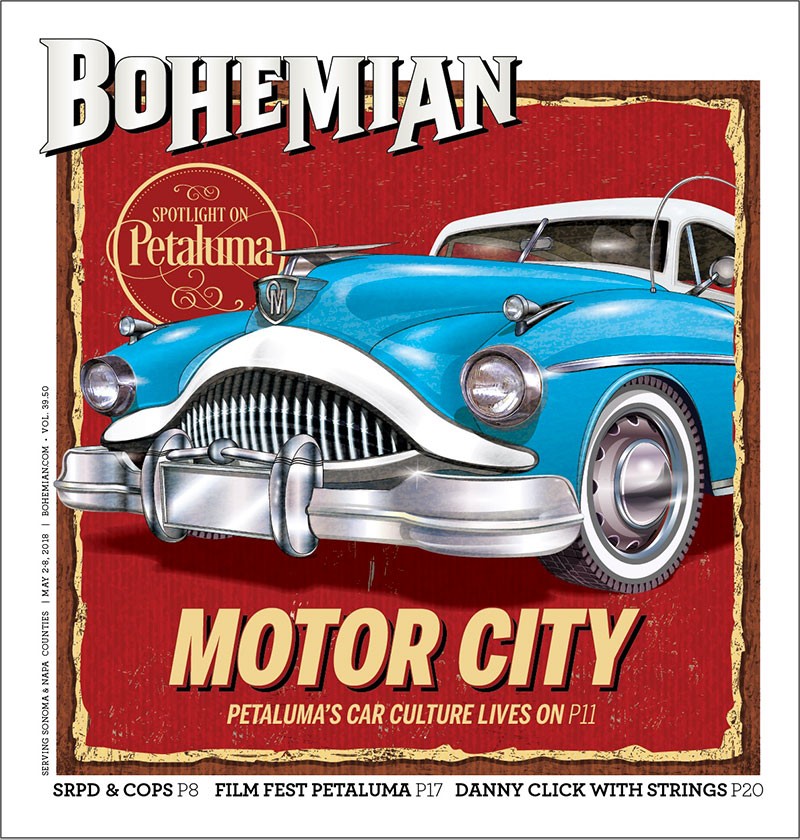 They say the key to a happy life is to always have something to look forward to—and whether I’m coming from or going to the Bohemian office, I always look forward to the part of my commute that takes me through the heart of Petaluma.

There are a few reasons for this, and they mostly have to do with classic cars, American Graffiti, New Orleans, cheeseburgers—and the fact that Petaluma pleasantly syncs with the vision of California I’d conjured in my mind’s eye before I moved here some five years ago.

Every year, Petaluma celebrates American Graffiti, the classic-cars classic about rock ‘n’ roll and car cruising, which takes places in 1962 and was partially filmed in Petaluma in the early 1970s by George Lucas. Of course, I didn’t know any of this until I moved to the North Bay.

As a kid it was one of my favorite movies, and it’s the reason Del Shannon’s “Runaway” remains one of my all-time favorite tunes. This year, the Salute to American Graffiti takes place downtown on May 19 as part of the town’s three day Cruisin’ the Boulevard event.

Thanks to American Graffiti, whenever I’m in Petaluma, I’m looking for one of those characteristic cross-the-car connections with a fellow traveler, usually while I’m eating hamburgers out of the bag or headed for the bag at the Walnut Grill (310 East D St.) or Five Guys (401 Kenilworth Drive), or, yes, Jack in the Freaking Box (Heaven Is a Place on Earth).

I recently pulled up to a red light in town with a juicy number from Five Guys in the bag. A young woman pulled up next to me, and she was cranking some vintage Iron Maiden. Bruce Dickinson’s characteristic voice rang out as I thrummed the drum part on my steering wheel and screamed at the woman, “The Maiden!” The woman looked over at me, gave a short “yup” and reached nervously for her handbag.

Another time, a couple of years ago, I was rolling down East Washington, and as I passed his car, I yelled “The Zep!” at a guy who was blasting “When the Levee Breaks.”

He pulled up to me with a hateful look as we waited for the light to turn. “What is your problem?” he yelled at me.

“Oh, I thought you were cursing at me.”

And just last week I pulled up to a light on East Washington and was stopped next to a young, bearded guy whose vehicle looked familiar, very familiar, to me—it was the same year, model and color of my old Grand Marquis, which I bought off a lot for cash in New Orleans in 2012. The young man answered all my questions about where he’d bought it and was quite friendly as I openly gawked at his ride.

The Grand Marquis was the first car I ever owned, and I bought it when I was in my mid-40s. I used to joke with people that while I did buy a gas-guzzler, my lifetime carbon footprint was so small at the time that I had some catching up to do. Then I wrecked the GM and bought a Honda, which gets great gas mileage.

But the Honda needs lots of TLC, which is why I love to cruise in to the Oilstop Drive Thru Oil Change (601 E. Washington Ave.) for a lube-up and cup of coffee from the guys while they grease up the vehicle and check the fluids. Plus, there’s some good Chinese food behind the Oilstop at Kwei Bin (613 E. Washington St.), where you’ll never joke that the egg rolls are so oily you’d swear they were marinated in used motor oil (the guys at Oilstop thought it was a funny joke, anyway).

I like to watch the traffic go by on a Saturday morning sitting in the Oilstop bay, and indulge this weird idea that I’ve been cultivating about Petaluma being reminiscent of New Orleans. Am I crazy?

Perhaps. So I got in touch with Tony Najiola, the Petaluma chef and owner of the Central Market (42 Petaluma Blvd). In talking with the New Orleans native, I felt obliged to run an observation up his flagpole to see what he thought, and here it is: Whenever I come into town from the south, I told Tony, the cruise down D Street for a few blocks feels exactly like St. Charles Avenue in New Orleans, which is also quite leafy and features mini-mansions and Spanish-tile roofs.

Unlike St. Charles Avenue, there’s no streetcar named desire running along with the cars on Avenue D, but there is an interesting spot along the road where cars for sale are lined up along the street like some sort of outlaw, open-air used car emporium, which in its own way is very New Orleans, since that’s pretty much where I bought the GM. And the Petaluma River has a couple big turns in it by Lakeville. Is it a stretch to call it a Petaluma another Crescent City? And don’t let me forget to mention that there’s New Orleans–style barbecue at Faron’s, located to the northwest of downtown (4701 Bodega Ave.). That’s something to look forward to—happy days are here again!

Chef Tony assured me I wasn’t alone in the NOLA-Petaluma feeling. He completely agreed with me about D Street’s weird resemblance to St. Charles—and he went on to talk about how certain parts of Petaluma reminded him of growing up around New Orleans. Tony’s not a big fan of classic-car cruising, however. Check out “Local Knowledge” (p14) for the details, if not the detailing. For that,
head to Touchless Car Wash
(540 Lakeville St.).

Correction: the author was so mesmerized by D Street that he incorrectly referred to it as Avenue D. Sorry about that, Don from D Street!